*I am not liking some of my kitchen magnets. More importantly, the alphabet letter ones I am constantly bending down to pick up and put back on the fridge because my 19 month old adores carrying them around the house for no reason whatsoever. If they’d only not be so tempting to her, I might still like them. My poor aching pregnant back. 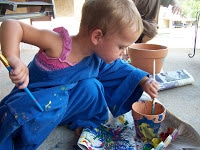 *Toddlers trying to paint things. Like a flower pot, as shown here. She painted herself, her shirt, and the newspaper almost more than the pot! I say almost because her pot actually took the longest to dry because she layered it on so thick!

*There is nothing cuter than a foofie toddler girl wearing her first underwear OVER her diaper, as a diaper cover, because she won’t leave her diaper alone. She’s been ready for this pseudo-transition when she started putting on her brothers’ underwear herself, and my underwear when I was unpacking my dresser’s box and putting my clothes away.

*Nothing cuter (again) than nightgowns on a baby girl, any age. We needed slightly more summerish sleepwear for her (since our A/C doesn’t get so cold), so after yesterday’s shopping extravagnza, I’m smitten with her little foofie girl body runnin’ around in some cute ruffly girly nightgown! 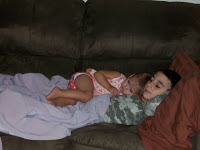 *Lastly, my big brother got some lovin’ when she crawled up on his chest and laid with him on the couch, watching Noggin. And yes, of course I got a picture of that, what am I, nuts? 😛 Especially with her new Dora underwear. Good grief those things should be illegal for cuteness!