Note: I took a day or two before posting this. I really needed to collect my thoughts and internalize it all a bit. 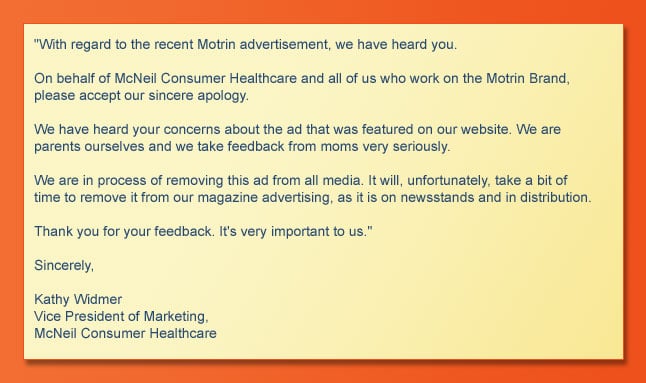 In case you haven’t already heard, this image is what appears on Motrin’s website now, instead of the ad. It’s an apology, acknowledging our complaints about their ad. Thank you Kathy and Motrin for listening, for acting, for wanting to make this right. They heard us and responded, in less than 24 hours even, especially for company not into social media at all, that’s huge!

I hope, if this proves anything, it proves the power of moms, of women. We came together as moms and spoke our minds, regardless of how ‘small’ this might seem to some. Our voices were heard. What more can you ask for about something you feel passionately about?

It is important to keep it up, moms, and ensure you speak your minds and have your voices heard. Less than a century ago we were given that chance, to speak our minds. It’s been an uphill battle since, being taken seriously, and we’ve got some ‘road to hoe’ still, but with each and every time we open our mouths we’re getting there. Can you believe we almost had a female President or Vice-President this year? Regardless of your political affiliation, that is pretty huge.

Unfortunately, it seems, because we banded together for something like this, we are being referenced to as one big tidal wave of “Borgs” crashing down on poor, unsuspecting Motrin for their mistake, and worse, from other sources who say we have nothing better to blog about (read the comments section).

I can understand that some simply didn’t ‘get it’. What I don’t understand is, if they didn’t get it and wrote about it, denouncing our efforts, why did they decide to turn around and do the very thing they accused us of doing- focusing their efforts on something ‘small’ like engaging in discussions bashing us, instead of these very important causes they themselves feel should be discussed. ‘Pot calling the kettle…’ much?

Funny, how these nay-sayers only took notice of what we were talking about at that moment (Motrin), but not a single solitary finger-pointing naysayer bothered to check if any of us are indeed involved with charities or other important topics, such as our environment, poverty, autism, breast cancer, domestic violence, and more. Let’s not forget rallying to help Nie Nie, or helping baby Mia.

Guess that isn’t newsworthy enough for them to notice. Nope, better pick on those big bad mommy bloggers, those borgs, those whiners. Bleh.

You know, just because you don’t understand it doesn’t mean we were wrong and deserve to be called names for it.

Might not have been important to some, similar to what they feel may or may not be deemed ‘blog worthy’ on my blog, such as my son’s awesome letter about football in my previous post, or my Budget Challenge update, but it was important enough to many. It boils down to how it depicts us as mothers. As Jessica Gottlieb brilliantly said,

..don’t call me a bad mother. Don’t call anyone a bad mother and, please, never ever joke about our babies. Because we love our babies more than life itself and I will never apologize for defending motherhood.

We don’t go marching around the internet telling you what you can and can’t write about, dear nay-sayers, I’d appreciate the same respect from you.

Yesterday marked the close of International Babywearing Week, and a bittersweet end at that. Babywearing International responded to Motrin’s ad. I absolutely adore what they had to say, and offer as a response on how to, in addition to their apology, make what Motrin did right:

We urge McNeil Consumer Healthcare to launch an ad campaign of equal prominence that demonstrates the benefits of babywearing and shows babywearing mothers to be the savvy consumers that they actually are. As babywearing advocates and educators, we feel that a well-researched campaign showcasing babywearing in a positive, truthful light would do much in the way of making amends for the irresponsible advertising that has been so hurtful to the many caregivers who proudly wear their children.

Last tid bit about all of this : I read the responsible copywriter is on maternity leave. So if there was any question as to the status of who wrote this ad, we now know, she’s a mother. Wow.

And that’s all I have to say about all of that. Back to my regularly scheduled program of changing diapers, burping newborns, and baking up a storm. Oh, and celebrating my birthday tomorrow.