Lisa decided to surprise her family with S’mores stuffed french toast for breakfast.

It looked like it was going to be a good day to work and be outside. My husband had bought wood to build some shelves for a special upcoming project for the blog, and some stain for the privacy fence. The kids and I were excited about spending the day in the sunshine until they finished staining part of our fence and suddenly, the sun seemingly dissipated and rain drops fell from out of nowhere. The clouds looked a tad ominous, but it didn’t look like it was going to be TOO bad. “There’s no rain in the forecast today,” my husband reassured me before leaving for the store with the girls.

Downpour central. My husband was at the store riding it out with the girls while the rain shower showed us who’s boss. Breakfast was going to have to happen.. what was I going to make? Was our outdoor day totally a wash? (Pun intended.)

And then it hit me – what if we took that fun, campfire taste of S’mores and stuffed it into french toast?

We’d been planning to do more S’mores on the grill later that day, so I already had all the important stuff. We weren’t going to let a little rain, schmain ruin our plans, am I right?

I had the Nutella on hand, just in case I needed a little chocolatey reinforcements. (Plus, Nutella isn’t a bad backup for ANYTHING!)

I cracked an egg in the bowl with cinnamon and butter ready nearby.

In the food processor, I crushed up the graham crackers so make it easier to bread the french toast.

After sprinkling the cinnamon and milk into the whisked egg, I dipped each side of the bread into the egg mixture, and then into the crushed graham crackers and onto the heated pan for frying.

It didn’t take long to fry both sides, but I loved the texture of the bread with the graham on it.

While it cooked, I quickly sliced up the marshmallows in half so they would lay flat.

Once fried, look at how beautiful and toasty it looked! It was time to layer the ingredients – first some melted chocolate (with or without Nutella), then the sliced marshmallow, then more chocolate/Nutella on top, waiting for your next piece of french toast to go on top.

After cutting it in half, though, I noticed the marshmallow wasn’t as melted as I wanted it to be. I could’ve put it back on the frying pan to toast a bit, but I had a better idea…

I used my sandwich maker instead. (You could use a panini or sandwich press if you wanted.) Applying simultaneous heat on both sides at once did the trick. It may have lost a little of that delicious crumb-texture on top, but it gained that ooey-gooey marshmallow-chocolate yumminess it needed.

Will you take a look at THAT!?

Are you a french toast fan? Who would YOU make this for?

Here’s the recipe, be sure to bookmark or pin it for later! 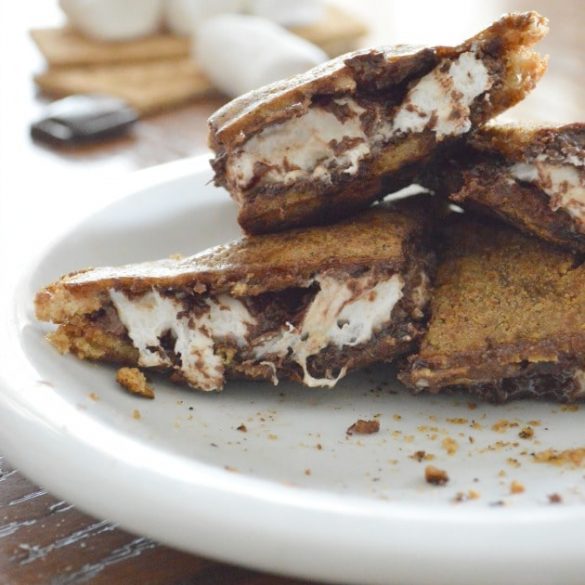 Tried this recipe?Tag me to show me @crazyadventuresinparenting and/or use #MadeItLikedit to be featured on Pinterest!
2.3K shares

Sometimes Mom Has to Jump, Too