Our day of hilarity began before I was even fully functional (read: awake enough to even considered coffee, let alone consumed it). My son calls out with urgency “Mooom? I can’t get the game out of the Wii!!”

I’m foot-stompin’ mad. Brand new Wii given to us for Christmas and not even 2 months old and we’ve gotten a game stuck.

And I haven’t had a drop of coffee to kickstart my brain, yet.

So I Google the problem, try a couple ‘fixes’ but to no avail, so I call Nintendo, start a repair ticket, yadda yadda *stillnocoffeeinmeyet*. My husband comes home and I deliver the blow. He takes it better than I thought he would, but no one is happy considering how much we’ve grown to love the thing already (damn Nintendo for inventing crack in a box). I’m about to pop this bad boy open to see if I couldn’t hand-crank the game out myself when I display for him what is happening.

“Are you sure there’s even a game in there?” he ponders.

..and I don’t finish that ‘thought’. (Mind you, I’m still not caffeinated, yet. I mean what I say – powered by coffee.)

Because I am now fearful that I am the single dumbest person on the planet, I suddenly and immediately call to attention our doom-and-gloom children pouting nearby and ask for the swift collection of every Wii game we own, on the double. Cases and all.

The cases make their entrance, and I tell ya, we couldn’t get ’em open fast enough, only to find one is missing. DRAT! It’s gotta be in there. I swore hubby was on to something.

It’s about then, as I’m about to sink my pitifully sad and uncaffeinated butt back into my chair, that my oldest son arrives….

… with the missing game, found sitting a top the receiver.

There was never a game in the Wii.

5. No one plays the Wii or does anything requiring actual brain function before mom has had coffee. (This goes along with rule #3 – Try not to use your brain to figure anything else out before first cup of coffee is finished.)

Dinner began with my four-year-old shoving every single solitary piece of steak into his mouth, all at once, trying to impersonate a carnivorous chipmunk, so the giggles spewed forth and became infectious all around as we were poking fun at his chipmunk cheeks, all-the-while covering our steaks, giggling and commenting how he was eyeing our plates looking for more.

As soon as the giggles began to subside from that episode, the baby, who was on my lap, decided the table seemed tasty, and began sucking on it. We all paused altogether, looked at him, and exploded into laughter in unison.

He looks up, and belches. Hard.

Mmm. Tasty dinner table. Gives new meaning to the phrase “Table for one” 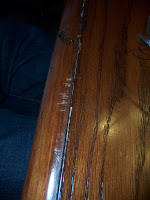 He immediately stops. “But why?!” and meant it.

Cue the giggle explosion once more, as my husband attempts to explain that he has teeth, his brother doesn’t, but nope, he succumbs to tears and laughter as we all nearly pee our pants. He truly didn’t think biting the table was a bad idea.

Then, as soon as I thought I might control openly weeping at how hard I was laughing, he began to pout in the only way he knows how because “everyone was waffing at him”.

Oh good gracious I couldn’t stand the cuteness. Of course, though, this made us laugh even harder.

Seriously don’t think I’ve laughed that hard with my kids in a while.

So, my gift to you for Valentine’s Day (albeit late): Feed your toddler steak, chipmunk-style, feed your infant your dinner table, and pretend to break your Wii. And laugh at it all. A lot.

Laughter is one of the greatest gifts to share with your family.