My husband is never going to take me anywhere again.

He was off today, and so our plan to was to venture to Walmart to see about some spring/summery tops for me and Lowes for a Dremel tool so he could finish his Pinewood Derby car with our son.

We got there, and things were getting accomplished in great time (I’m actually ecstatic as my husband single-handedly found every awesome shirt for me to wear, while I was bringing up the big fat 0 unable to find a single thing). Appropriate sizes were found. Shirts got tried on and fit well. We were about to leave, as I was literally putting my shirt back on, when it happened.

The lights went out.

Now, I’ve been through the lights going out in a big store before, they typically have a generator that lasts a half-hour or so, in an effort to finish checking out all patrons, or until they get the power back on, etc.

That didn’t happen. In fact, associates barracaded us to the front of the store, forbidding us to go anywhere. This one lady ran around like life was ending and the sky was falling. After 20 minutes of nothing but many ticked off customers leaving, abandoning their carts in disgust, the Walmart associates announced they were sending everyone home. Baskets were left full. No one ever paid. Everyone had to leave.

My husband acted quickly, and asked the lady who was at the fitting room if she’d be so kind to keep our things with our name and phone number on it, to come back and get it later, so I was lucky enough to not lose those things. Others with groceries and perishables didn’t have that luxury, sorry to say.

My husband at this point is pinging well above highly-irritated, after all that time to not even be able to purchase what we were there to get, and wonders if Lowes even had power, since it’s directly next door to Walmart, as we were told by the Walmart associate filing people out the door that apparently the power outage was on *our* side of town.

Lucky enough for us, Lowes was indeed open. So my husband went in alone, instead of dragging our three littles inside with me inside for one tool, which was located at the front of the store.

Two minutes went by and I hear shouting- loud, fierce shouting from a man.

I immediately start looking quickly around to see where the yelling is coming from, as I was afraid it was a fight between two men or something, and my children were in the car.

It was only a Lowes associate, by himself, walking out of the store, screaming at the top of his lungs obscenities directed at all customers within ear shot.

“@#*$ customers shopping on [email protected]#*$ friday.. go home mother @#*$!” (use your imagination to which four-letter words he used, there).

Naturally, the protective mother in me jumps into the drivers seat to wield the car around to the front so I could accost one of the associates to get me a manager pronto so I could tell him about the incident that just transpired in front of my children, who repeat everything like a parrot and were hopefully not going to mimic the vile man. My husband saw me, as he’d already finished shopping, hopped in and I didn’t even get to tell him before I’m at the front, hopping out, talking to a manager. Needless to say, after I was one of three complainants about his actions, I’m sure “Carlos” was fired.

Guess he didn’t really want to work there tonight, anyway.

At that point we needed to get our elementary school kids, as it’s 2:40pm. We’re on our way, traffic lights were out at the intersection (yet stores were fine.. it was weird that Walmart lost power), and drive home. We note the suspicious clouds forming and wonder if we’ll have the starts of this weekend’s soccer tournament tonight. We approached the school five minutes later, and the itty-bitty, little-to-no line formed in the parent pick up area. We thought we had enough time to swing by the nearby Shoppette to get a couple drinks before getting the kids.

After what had happened already, I should’ve known not to do that.

I hopped out at the Shoppette, searched for the least sweetened/healthy-for-you beverage option, while grabbing hubby something, when, as I approached the register, a guy hecticly runs around, asks for some towels to put under “her head” as he scurries across the floor, looking around the registers and aisles nearby. I look around.. what was he talking about?

A woman fell and apparently hurt her head badly, and was lying on the floor.

At the moment I realized what the commotion was, police screeched in at the doors and run in looking at me and others for direction. I point to the back where I saw the hurried guy lingering, figuring that’s where she was, but I wasn’t exactly certain myself.

Moments later, two firetrucks arrive, lights, sirens blaring, muscular specimens of firemen come screaming out of their trucks with bags and supplies and whooziwhatzits galore, collecting stuff when the ambulance pulls up, lights illuminating the darkening skies as me and others are aghast at the fuss going on around us. I remarked under my breath “Is the sky falling or something?”

I should’ve shut my mouth.

I collected my receipt and walked back to my van where my husband, shocked, said “All that for drinks, huh?”

I began to tell him about what must’ve happened as we’re on our way, down the street to the school. A lightning bolt struck above us, and thunder can be heard roaring in the distance, waiting to visit. We’d just arrived in front of the school about to turn when I ask him for my drink.

In all of the commotion, I left the drinks in the store, and we would have to go back. Wonderful.

It’s at that point my husband points out, among the fiercely forming clouds and ominous looking sky that soccer would inevitably be canceled. And we fetch our children. The kids hopped in, happily asking what we did today, in which my husband replied “Oh nothing, your mother just broke Walmart, got a guy fired, busted a lady’s head open, and will probably get soccer canceled.”

Yeah, thanks for that, hon.

And we get the drinks that I stupidly left at the store, and drive home, we arrived just in time for the sky to indeed open up on us, and rivers form our front yard and in back. 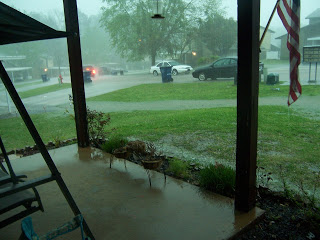 And soccer? It did get cancelled tonight.

And Walmart? They called twice, their power is back on. I can get my stuff now if I want. 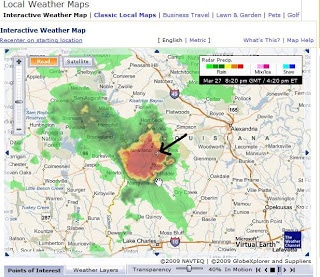 Me? I think the smart choice is to never, ever, leave the house again. Or something. Apparently, I have skills in the “Sky is Falling” department.