People, I have a serious problem (other than my online addiction *ahem*). It seems the internet has a hit out on me, I think. As much as I love it, so, it doesn’t seem to likey me very much. This makes me sad.

You see, first Technorati went south with their stupid ‘colo move’, and hasn’t “pinged” me in some time, nor updated my authority in forever. No biggie, right? Then Firefox went and made me update it a month or so ago, and it went all kinds-of fricken crazy on me. I would seriously be shut down 2-3 times a day (ask my why I still remained on it? ‘Cuz I was too lazy to transfer bookmarks! Gah, idiot!)

This morning I woke up to absolutely no email in my “crazyadventuresinparenting” account. (Never ever do I get “0” email, because I subscribe to some blogs via email and Twitter updates there, too). Sure enough, I check online, and I’ve got 50+ waitin’ on me. Never downloaded off the server. After I reconfigure all of that, and forward everything that didn’t get downloaded, I proceed to get knocked off for the bazillionth time from Firefox, causing me to go @#(&@#$ lose it and search for an older version to download. So far, so good {knocks on wood}.

My internet connection was DRAG.GING. in which, I had to reboot, refresh, restart, unplug and re-plug in my modem, and when all that didn’t work (it made it worse) I was on the phone for over an hour talking to an AT&T rep who kept repeating himself and getting me nowhere and fast. My cheek hung up on him accidentally. Whoopsie!

Finally the connection wants to work (for the most part) but it’s about then that I realize, I hadn’t been able to send out email in over 4 hours. Yup, Gmail doesn’t want to send email, now (whereas this morning, it didn’t want to receive). Beautimous.

And in between all of this, I’m nursing my poor toddler’s horrible diaper rash, negotiating a peace treaty between my sparring children, and attempting not to go grayer by the second when I realize we were missing an ingredient for the night’s dinner, when the homemade tomato sauce had been simmering all day, the noodles were already boiled, vegetables had been started, and there was simply no time.

Amazing I came out of the day unscathed, not any grayer (I don’t think). Thirteen things that went way, way wrong = not much fun to be had. Thank goodness that day is over, that it’s a new day, and hopefully it’ll be one that isn’t filled with computer and family/diaper rash/children war-like woes.

While writing this, I seriously could have fallen asleep in my chair right now, exhausted from the day’s events, just like my poor toddler did earlier, after the Advil kicked in, and the airing-out-her-butt/diaper cream combo started working: 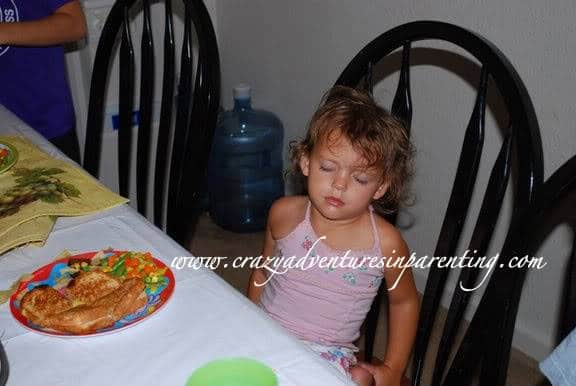 I am thankful she finally received relief. Unfortunately, it happened just as my poor baby had just sat down to lunch, too. Didn’t have it in her to eat a single bite, then proceeded to sleep almost four hours. Now that’s what I call a nap!

What about me, is it my turn for a four hour nap now? 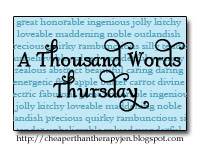