It was a torturous trip to the Halloween store for us. He couldn’t decide what he wanted to be, and seemingly everything he wanted was too scary to have around the little ones, too expensive, or involved a superfluous gun or sword of some kind. And instead of shopping for a simple costume, it became shopping for something to wear with the SUPERAWESOMEAMAZING overpriced toy he really wanted. Not what we came here for, pal.

“Ooh, what about a Gangster? How cool is this costume?” I suggested.

“Ohh, do I get that gun, too?” His eyes sparkled with delight.

Friggin’ frackin’ accessories! And the price tag!? Ouch. “A TWENTY DOLLAR GUN? No, dude. No. Besides, it’s white. That’s a ‘girl’s’ gun. They must be out of the boy’s gun.”

(Ahem. Don’t hate. The white lie was necessary – I did what needed to be done.)

After much arguing, pulling, prodding, nail-biting, and promises of a sweet top-hat accomplice, he was able to be swayed into being what I suggested originally – a gangster. Especially when I told him I was a wonderful make-up artist and could give him fake stubble and everything, to look like a man. He bought it – hook, line, and sinker.

{Insert my pumping fist at the awesome that I am here}

With dinner sizzling away in the kitchen, he unwrapped his would-be costume, only to find it was way wrinkly, with an itchy starched fabric. I broke out the garment steamer and steamed it for a good twenty minutes, making sure it looked extra sharp. He seemed fascinated with one accessory included – the dickie. He kept saying that word. A lot. He complained it itched him, or was too tight. I could see he wanted to like the costume, but wasn’t 100% there yet.

And then I go and screw up do his make up.

We were running behind, trick-or-treating time had already begun, we were losing time (which didn’t really matter in the great scheme of things, we don’t keep the candy we get from walking house-to-house anyway) and so, my stubble-making prowess was rushed and inaccurate with a brand new, cheap-o, dollar-store variety mascara which I inadvertently purchased the WATERPROOF version of  (crap!), so it was like mud to apply and smear in, which was not at all what I had in mind. I imagined stippling mascara all over his upper lip, chin, cheeks. Instead, it smudged and gooped. (I suck.)

He wasn’t too keen on the new “facial hair” and was horribly embarrassed. Nail in the coffin for mom’s wonderful costume idea – I began really regretting helping him selecting it. But he held his (fake hairy) chin high and went out to see his friends, walk with us, and celebrate Halloween anyway.

Little did he know – every house, almost every passerby commented, remarked, oohed, praised him for his different costume.

He was surprised – shocked, even. He thanked me for helping him pick it out with each compliment. His little brother followed closely, mumbling how much he wanted to be a gangster, too. By the end, as we neared home, he held my hand (swoon), and he thanked me for the best Halloween ever.

My heart melted, my tears welled behind my eyes, my breath lobbed like a tennis ball between hyperventilation and asphyxiation with his words.

I realized the little things we do for our kids, even the smallest of decisions made, are big to them in ways we may never realize. They all matter more than we will ever know. This instance proved that and thensome. 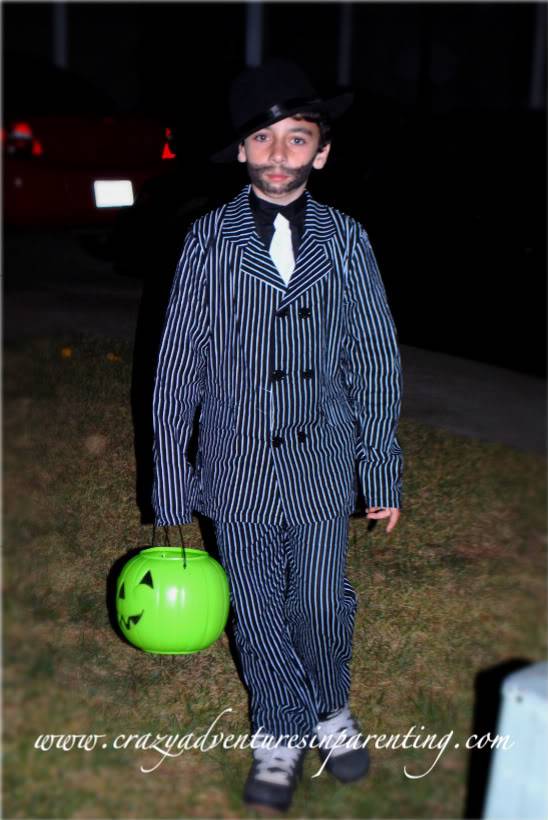 A Weigh-Less November – Want to Join Me?