When I was a child, I specifically remember my mother clipping out an article from an advice column and pinning it near our rotary phone on the wall. You remember, the kind of phone with the super-extra long cord so your mom could be cooking on the other side of the kitchen and still talk? Back before cordless and touchtone phones? Oh yes.

This newspaper clipping was well tattered and yellowed, as that kind of paper generally gets over the years, but it was always on our wall, this small square that eventually got moved to our fridge for fear of losing it. I do believe it was one of my mother’s favorite things to display even though, from a distance, it wasn’t much to look at.

Now, as a parent to my own (many) children, I often think back to that paper from that advice column, longing for it, and giggle to myself. I understand that pride my mom had for it now. I really wanted one for myself to hang, too, so I decided to make it myself. I also decided to share it with everyone of you, in case you, too, wanted to display it proudly.

The paper was entitled “The Meanest Mother in the World.”

It was in response to a harried mother who sought out advice on what to do about her ungrateful children calling her ‘mean’ all the time. The advice columnist advised the mother to think carefully about the following (the part my mother printed):

“I had the meanest mother in the world. While other kids had candy for breakfast, I had to eat cereal, eggs, and toast. While other kids had cakes and candy for lunch, I had a sandwich. As you can guess, my dinner was different from other kids’ dinners, too. My mother insisted on knowing where we were at all times. You’d think we were on a chain gang or something. She had to know who our friends were and what we were doing. I’m ashamed to admit it, but she actually had the nerve to break the child labor law. She made us work. We had to wash dishes, make the beds and learn how to cook. That woman must have stayed awake nights thinking up things for us kids to do. And she insisted that we tell the truth, the whole truth, and nothing but the truth. By the time we were teenagers, she was much wiser and our life became more unbearable. None of this tooting the car horn for us to come running; she embarrassed us to no end by insisting that friends come to the door to get us. I forgot to mention that most of our friends were allowed to date at the mature age of 12 or 13, but our old fashioned Mother refused to let us date until we were 15. She really raised a bunch of squares. None of us were ever arrested for shoplifting or busted for dope. And who do we have to thank for that? You’re right, our mean mother. I’m trying to raise my children to stand a little straighter and taller and I am secretly tickled to pieces when my children call me mean. I thank God for giving me the meanest Mother in the world. Our country doesn’t need a good five cent cigar. It needs more mean Mothers like mine.”

(Turns out, the author isn’t unknown. Her name is Bobbie Pingaro.)

Instead of printing the typed, plain version of it, similar to that of the newspaper clipping, I created something prettier, more poignant; something that played up Bobbie’s words beautifully that I think will be eye-catching to my children when they see it on the fridge. 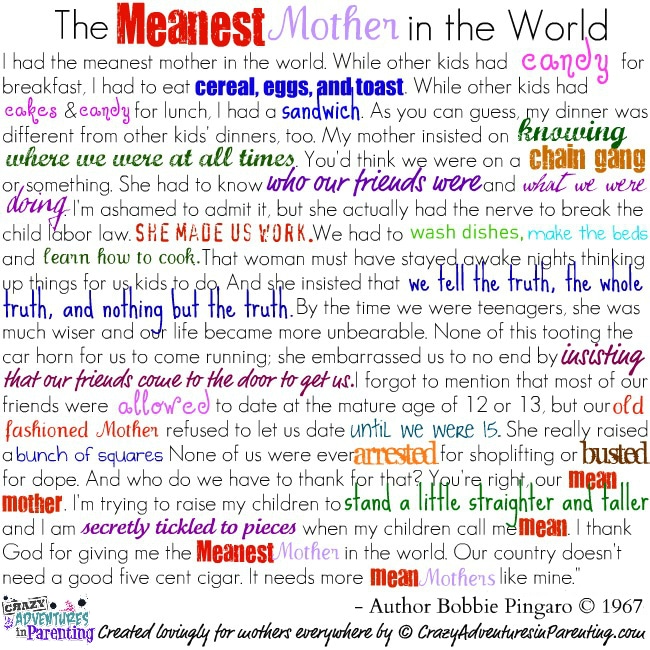 I love how timeless these words are, don’t you? I think it’s amazing how times really haven’t changed, have they? The terminology might have changed a bit; “five cent cigar” and “dope” but the reality of the above is, we parents strive for the exact same in parenting our kids. We’re looked at as “mean” when we have to say “no,” even if it is in our children’s best interests.

I hope I raise my children to be as grateful as I am for having had a ‘mean mother’ growing up. What about you?