It all started when I found this “bow braid headband” tutorial on Pinterest (it usually happens like that, right? Pinterest is the root of all “evil” with new things lately, huh?), I looked at this lady’s website and found her knotted headband tutorial and tried it on my daughter. IT WORKED!

I then decided to try her dutch flower braid tutorial on my older daughter, and it worked, too!

It got me experimenting every day, gearing up for school next week. I created a circular twist french braid on my five-year-old that kicked some mega-butt. See?

Which then, today, turned out to be some wickedly awesome kinky curls I wanted to showcase.

So I did teeny-tiny twists at her hairline and pinned them with colorful bobby pins, to make this funkalicious do:

But today, today I came up with the ULTIMATE awesome hairstyle for my twelve-year-old – the Lattice Braid. Check it!

It started off quite accidentally. There I was with a fresh canvas of hair, not knowing what to do other than trying to come up with a way to keep her hair back in the Texas heat today. All I basically did was section off small pieces of hair at the hairline to ponytail with small elastics, making teeny-tiny ponytails on top. The width of these sections are about 1×1. 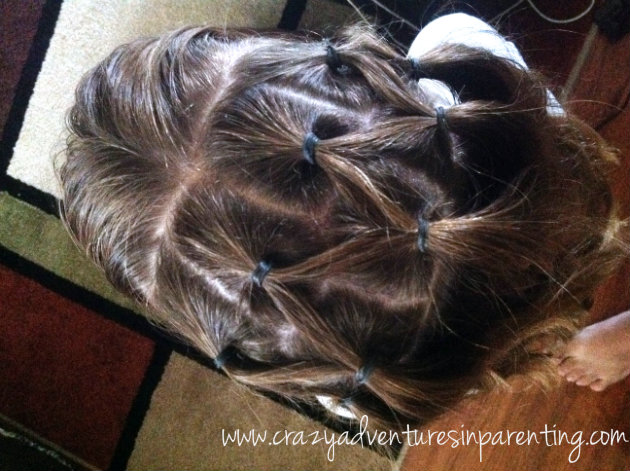 From there I sectioned more hair, but divided each pony tail into two, pairing two halves together with a new section of hair in a row.

To begin a new row, stagger the new row by sectioning it off underneath the elastic of the former row (see picture).

When I finished the second row and discovered what I’d done, I couldn’t stop. I had to keep going, until THIS was created!

When doing this, you will not only stagger sections, like bricks, but also stagger your start, starting from left to right, then right to left (for the new row), and so on. I began on the left side of her head by her hair line, and where I stopped the row is where I began the next, alternating sides as I went row-by-row. Why? Because when you reach the end of a row, you will take the last ponytail as a whole, not dividing it into two. I wanted that alternated, so I chose to stagger the start.

Once you get to the nape of the neck and are left with mere ponytails (at this point, I had four), I wanted to braid her hair, and decided to braid the hair as far as I could go using four strands. The following video shows you how to braid with four strands of hair instead of three. Not too hard at all:

Once I reached the end of the braid to fasten the braid off with a regular elastic, I realized she had a lot left undone. Too much, in fact. I decided to tuck it under and use the extra to fray it out the side, whimsically, while pinning it under (like a crazy person). 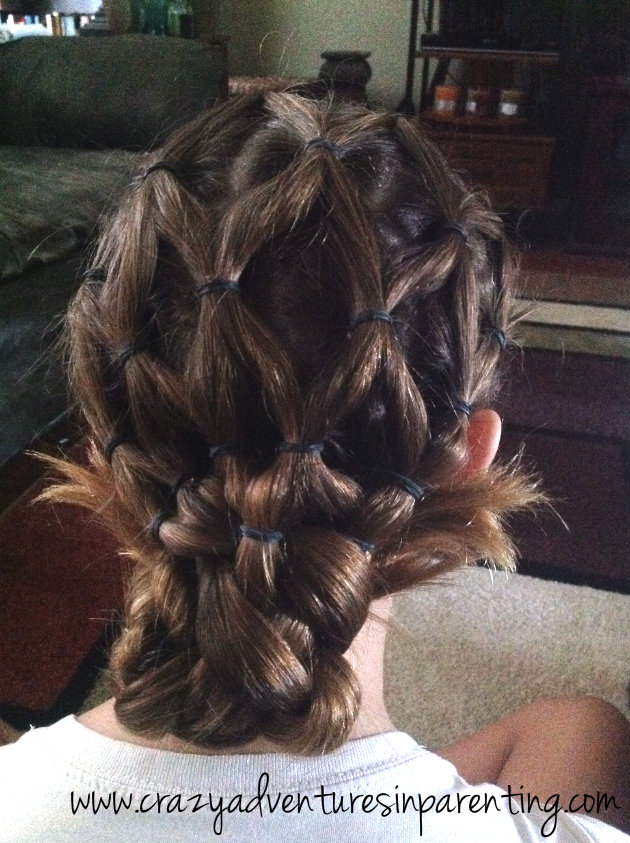