Everyday at around 2:30pm-ish, after starting the car and letting it cool down, I gather up the babies to go pick up the elementary schoolers. I don’t know why “it” caught my eye, Friday, but “it” did. I saw something was “stuck” to my passenger side van door. It looked…. hairy.

I feared getting too close to check it out. I (usually) know better than to get nose-close to inspect anything anymore, especially living in the South where there are bugs everyfrigginwhere. It brings up the awful memories I have of my “close call with death” back in college (ahem); a corrective lens-less Lisa with soap in her eyes in the shower, saw something on the wall and went in to inspect so close, she nearly nuzzle-nosed a friggin’ hairy spider the size of her hand in a shower stall the size of a shoebox.

I’m sure you can imagine, after flipping the hell out, this scared-of-spiders-Lisa-person (ahem) then ran down the hall, naked as a jay-bird, screaming obscenities and swearing off showering at college EVER AGAIN. She later learned to carry Lysol by the gallon and spray the ever-loving hell out of shower stalls before entering them. For whatever reason, her mother had convinced her that a thorough spraying of cleaning products before showering would spare her from a spider encounter ever again. (Remember this tidbit for later, k?)

So, there I sat, in my driveway, spying this weird hair ball something on my van’s door, not knowing what it was. I leaned in closer and I blew at it, figuring if it was just a ball of matted hair, nothing would happen, right? Unfortunately, it moved. A gangly, speckled leg stretched outward and pointed, and the “body” shifted. I jumped back. I felt my blood pressure alarmingly rise, memories of that college shower stall came flooding back, and my brain filled secretly with four letter obscenities in my Tourrette’s like response to creepy crawlies.

I could barely get the baby latched into the car, I was so afraid. I was too close to it, even if I was in the car in the second row, it was a mere couple feet away, and that is simply too close for my comfort. But, before I could even dream of doing anything to kill this invader, I had to put my acrobatic infant down. I feared she might lunge towards the hairy invader and be eaten on the spot, or something.

As soon as her car seat snapped shut and I closed her door, I realized, DUH! I’d be driving to school! A HA! I loudly thought to myself, It will die because I will be driving 55mph on the way there. There is no way it’ll survive, it’ll blow off the car. YES!

And I happily got into my van, drove away, and sung the praises of wind and aerodynamics.

Upon arriving at the school, however, I decided to get out and just “check” to see if the invader had indeed blown off like I’d expected it to. Imagine my surprise to discover that the little sucker was STILL there, as if glued to my mother #*($&@#$ van door.

I frantically began searching through my car for something longer than my arm, because I wasn’t getting anywhere near that thing, and found my sunvisor folded on the floor. Yes! That’s long enough, that’ll work!

After gathering enough courage to do it, I batted at it, knocking that scary effer to the ground, where it looked to hobble a bit on the pavement. A HA! I GOTCHYU, SUCKER! You’re on the GROUND! I’ll get in my car and run you over!!

And I did. I happily ran around the van like a crazy person (ahem), hopping into my car, throwing it in reverse, grinning like a madman while gritting my teeth as I rolled backwards, and then forwards again.

I sauntered over to the passenger side, expecting to see mutilated spider guts stuck to my front tire, only to feel my smile melt from my face into a frown, because not only was that @#$*&@#$ NOT DEAD, but back up on my car door once again, like I hadn’t done any of this at all. What the what!?

I had no idea what to do, that was all I had in my bag of tricks. I had nuthin’, no resolve, no deathly spider spray, no handsome husband.. {record scratch} A HUSBAND! YES! I HAVE ONE OF THOSE! I SHALL TEXT HIM TO COME TO MY RESCUE! AND HE WILL KILL THIS VICIOUS, MAN-EATING SPIDER AND ALL WILL BE WELL!

And so, I texted my husband: “Babe, can you come home? Huge freaking spider stuck permalike on our van door. Seriously creeped out right now. Legs like @#(*$&@#$ claws. Bigger than a quarter, big body, speckled legs. Tried knocking it off and running it over with our van, but it webbed onto our door. Even at 55mph it stayed on! Send a few of your buddies, and a few machine guns. I think it has friends.”

He texted me immediately back, “HAHA! What the hell? Running it over with our van? Are you serious?”

I could hear his laughter through our texts. “YES! AND HE LIVED! Stop laughing at me! Are you on your way yet?”

His response, “Uh. Babe, I don’t think my boss is going to think too kindly of me asking for him to release me early to kill a spider for you.”

What? I Swyped as furiously as my finger could Swype: “GODDAMMIT, BABE! HE OWES ME! TELL THAT JERKWEED THAT IT COULD BE POISONOUS FLESH-EATING SPIDER AND IT COULD KILL OUR KIDS! IT COULD BE INJECTING OUR VAN WITH POISON RIGHT NOW!”

At this point, I was visibly shaking with fear in the drivers seat, feverishly texting my husband, awaiting some sort of response. He didn’t text back right away. I assumed it was because he was busy at attention in his boss’ office, begging permission from his superior officer to leave, or driving hastily in our direction to killeth the spidereth that wouldn’t dyeth off of our vehicleth.

In reality, he was just too busy hyperventilating from laughing so hard to respond.

I finally realized I was totally SOL, and that I’d have to manhandle the bastard myself. But before I could formulate a plan, I looked up from the van to see the kids were dismissing from school. And, as if on cue with my panic, they ran towards me in break-neck speed. I jumped out of the car, “Noooooo!!”

But they ran past me, playing their “Tag! You’re it!” games as they do, celebrating their elementary school freedom, smacking each other on the backpack as they rush off to see who can hit the car door first. “Watch out, you guys!! THERE’S A SPIDER!!”

They stopped dead in their tracks. They know mom doesn’t play when it comes to these things. “Wha — where!?!?”

I pointed to the dangly hairy stowaway on our passenger door. “There, see? Now DON’T GO NEAR IT! BE CAREFUL!”

They quickly but gingerly climbed into the van, one eye on the spider, to ensure he didn’t come after ’em, with the other eye on mom, because they love watching me flip the hell out when I encounter one. I tell you, I couldn’t get that van door shut quick enough to keep my babies safe, even if they were counting down to Operation Spider Freak Out™. My third grader piped up to reassure me, “It’s okay, mom, he’ll die when we start driving.”

“HA! That’s what I thought on the way here, but he didn’t. HE STAYED ON. HE’S A NINJA SPIDER.”

My son kept assuring me anyway, in the five minutes it took to drive home, that the spider would surely not be alive any longer once we pulled up. “But….. just in case.. I’ll stay in the car. When we get home, you check, and if he’s alive, gimme a thumb’s down. If he’s dead? Give me a thumbs up.”

Not filling me with much assurance, there, son.

Once we pulled up into our driveway, I tip-toed over to that side of the van, expecting the worst and OHMYFREAKINGGAWD he was still clinging on, that strong-legged MONSTER!

I didn’t have to give my kids a thumbs up, they saw my flinch, my look of horror, and my mad dash inside, fumbling with the keys to open the door to find something, ANYTHING, to kill it. But I found NOTHING. Hubs had cleaned the kitchen for me the other day, and apparently hid the can or something, because it was simply nowhere to be found. Remembering my time in college, again, I sought out the next best thing – CLEANER.

I dashed out of there and back to the van with my hands on my trusty cleaner (even if it was only for glass), and proceeded to spray the beast with the sprayer’s setting on “KILL” as fastly as I could depress the trigger. And by “kill” I mean, it was set to “jet.”

All I managed to do was reaaaaaaally piss it off, because it started spazzing out at the harshness of the spray’s force coming at it, dangling and fussing and OHMYWORD do you know how scary that looks when you piss off a dangling arachnid?

Unfortunately, the spray wasn’t enough to kill the beast. I needed something.. else. A real weapon. One I could whack it with. Enter the Spider Killing Stick of Awesome™. 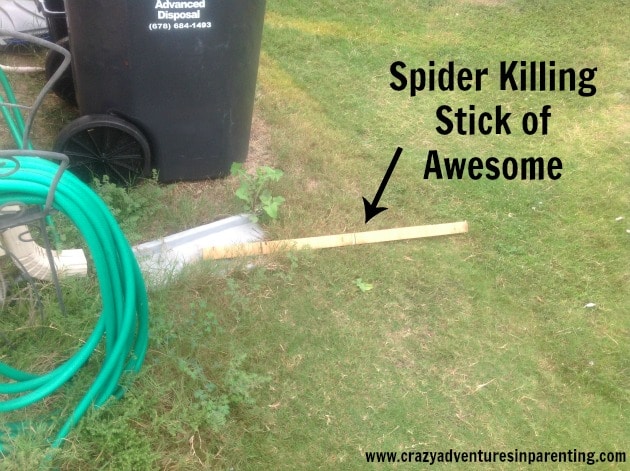 Paired with the Spider Killing Stick of Awesome™, my cleaning spray would stun it so I could thwack it with the stick. And I thwacked it again. And again. And by, thwack, I mean, I MUTILATED THE CRAP OUT OF IT.

So what, there’s now a clean spot on the van’s door where the spider once was. I have and will proudly display that clean spot as a hard-fought win for human-kind.

Make Ahead Breakfast Wraps in Bulk