I think you can safely assume that, after what we went through, I do my best to stay away from the doctor. We already feed them well, give them daily vitamins, but they’re kids and inevitably they’ll get sick. But I think you can surely understand why I secretly wimper and shake uncontrollably when walking up to the doctor, never knowing what might happen next.

My poor kindergartner has had a miserable time staying healthy since beginning school. Constant nasal congestion and sneezing plagues her as though she’s sick all the time. I likened it to being around new people and kids and being exposed to germs CONSTANTLY. You know how that goes. We do our best to pump up her baby body with vitamins and helpful medicines, but she’s already had a couple ear infections as a result, and in the past couple weeks she developed a congested cough, too.

For the ten solid days they were home from school for the Thanksgiving holiday, her and her brother (my third grader) spent the better part of the mornings coughing up a lung or two. No fevers, no aches or anything, just the need to move all the ‘junk’ from their throats around, and the rest of the day they were mostly fine with a little nasal congestion. Eager to play, happy to be home from school, ready to take on the world, they were sort-of sick. Almost sick. Not really sick.

As you recall, my third-grader is my sickly kid, my asthmatic, so whenever he’s experiencing something upper respiratory, his asthma flares up, despite all the medicines he’s on to prevent it. But I was doing my best. Had I have rushed them to the doctor right away, I would’ve been sent home empty handed and told it was a virus. I did everything they tell you to do – monitor symptoms and fevers (and there was none), and to schedule an appointment if it gets worse or doesn’t go away after a while.

And then Baby Dude got it, too. Lovely.

He proceeded to cough and cough in the mornings, even during the night, too. Mind you, once they were up and active, they all seemed okay with a little cough medicine.

And then Baby V started coughing on Friday, too. Fantastic.

Needless to say, this “waiting game” sucked, and no matter what I did, it wasn’t going away. It seemed we had reached the point of calling to make an appointment, because it wasn’t getting better (nor was it getting worse for any child), but more children were showing signs.

Monday night we’d finally resigned to calling for an appointment, and my oldest son began to cough, too, as if on cue. Heck, even I am beginning to feel a little something in my chest, with Baby V coughing all over me in the mornings, of course I’ll probably be next.

We scheduled our children within an hour’s time span, one after the next. But despite the appointment times, the doctor appointment for the five sick kids took THREE EFFING HOURS. Holy crap!

What the hell has happened to military medicine, man? Or is it only this teaching hospital? Because HOLY SMOKES, the crazy questions we had to constantly answer in triage, and then again before being seen was MINDNUMBING. What does having a broken bone have anything to do with an upper respiratory infection, and why do you have to ask these ridiculous, pointless questions before EVERY child receives care?

“Uh, aren’t you staring at their chart right now, doc? No.”

“Have they ever broken a bone before.”

“What does that have to do with their congested cough? No.”

And the questions just kept going on and on, for each child, painfully slow and dreadfully long. I packed some snacks and water bottles, but in the silent examination room I could hardly contain MY stomach pangs and growling.

“They took a half teaspoon of cough medicine…” grrroooooooooowwwwlllllllllll…. “this morning.” {hides face in shame}

Finally skating out of the examination room with diagnoses in tow, we were told to go to the front desk and schedule our two week follow-ups. Should be painless, right? My husband went to get the medications in another part of the hospital while I remained at the front desk to schedule the appointments.

Now, I’ve schedule appointments with clerks at the desk before, many times, but for whatever reason, the idea of having to schedule five kids at a time slowed this man’s ability to do his job down to a crawl. He was still click-clacking away at his computer alright, but it took almost a half-hour to get him to schedule us, to include a weird ten minute break when he walked away then came back mysteriously to apologize. I swear he was bargaining with someone on break to do it for him.

Needless to say, the above picture filled a plastic bag from the pharmacy, and doesn’t even show it all. The inhalers and antihistamines and decongestants and expectorants and steroids and OHHHH it’s too much.

But the highlight? Naked Baby V on the scale. My little 19-pound delicious butterball of a sweet baby body. 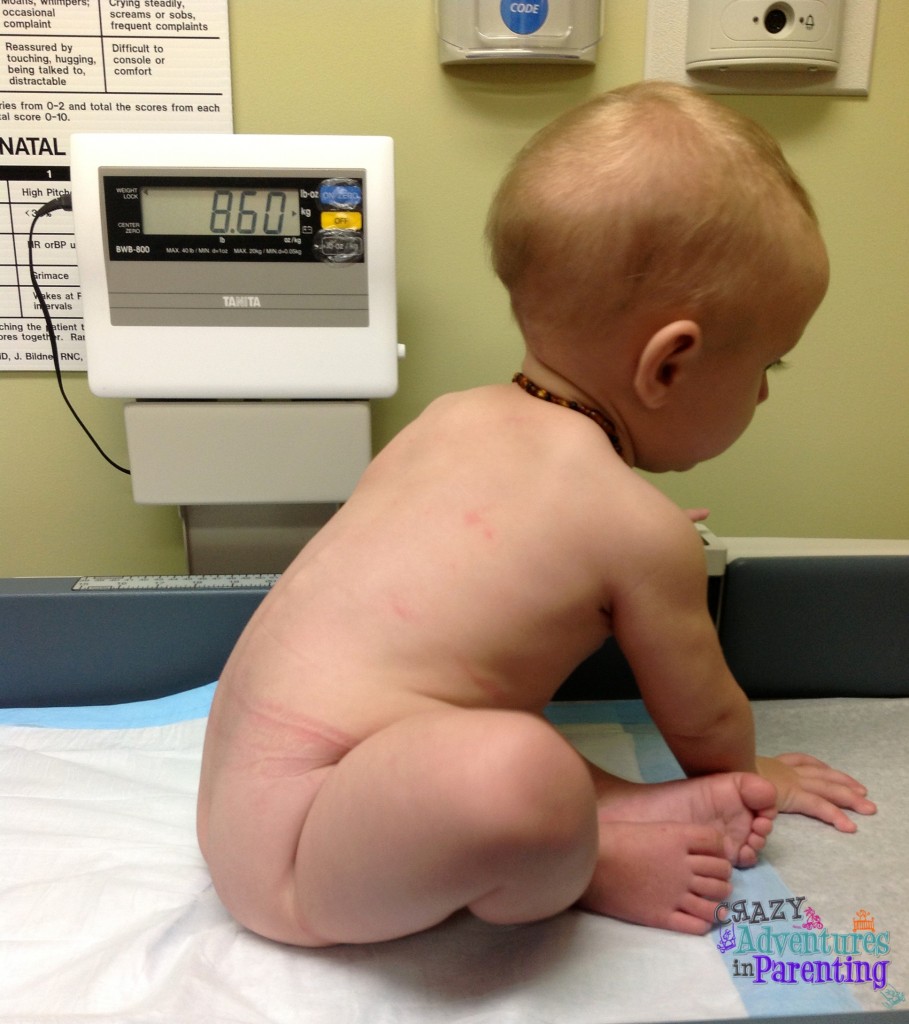 She didn’t like the doctor much, but that nudey body napped like a freakin’ champ during that hellacious visit. Thank goodness for small miracles!

Have you ever had a nightmarishly long doctor’s appointment before?

Top 10 Things Parenting Books Don’t Tell You (and I Wish They Did!)