Man oh man, Wednesdays haven’t been too kind to me lately. Here’s a little tale from last week for ya, with a little snippet about yesterday at the end. Like I said, it’s always something about Wednesdays.

Not one, but two alarms going non-stop woke me up out of a sound sleep. After having to wake up both teenagers the day before for school (who both slept through – or didn’t set – their alarms), I assumed each alarm going off corresponded with one of them. I figured they were both were sleeping through them, unwilling to wake up again, with the alarm beeps and buzzes perforating the quiet, slumber-filled house.

I had just started nursing the baby, so I had to nudge my husband awake to get the kids. After he got them both up, he told me both alarms were actually only my son’s alarms, and not our daughter’s, but she got up anyway (day two of her forgetting to set hers, apparently).

That morning, the teens drug their feet doing most everything to get ready – I think it was just something in the air. It’s always something on Wednesdays, and this day was no different. Twenty minutes after they’d left, I received a text from my son – “no bus.” It’s never late. In fact, they’re out there early because of how much earlier it comes than it was scheduled, but here they were, twenty-minutes to seven, and no bus yet.

I called the school – they don’t “open” until 7am. (Huh?) I Googled and called transportation – no one answered. I called both numbers repeatedly until I pressed “0” for an emergency with transportation, to get connected to a mechanic. He told me there had been no call from their bus number, she “musta just slept in.”

Um, excuse me? Well who takes over when that happens? Who calls to alert that another bus driver is needed? Who takes roll call? Or what if she’s on the side of the road and needs service – can’t you radio her?

“They have cell phones, they just can’t use them while they drive.”

(Can you hear the sound of me smacking my forehead at this point? Because I did. Because, wow.)

Needless to say, my children got a ride with our new next-door neighbor, no thanks to the high school or their transportation department.

Meanwhile, the younger kids now are on deck to get to school – first up was my fifth grader with a bus to catch of his own. He did wonderfully that morning, getting everything ready… except forgetting to put ice in his water bottle, or fix his snack. He also only wet his hair, flattening it, instead of scrunching it to curl it. It was easy to help him, though, and off he went unscathed.

My younger two, though, needed outfit-picking help, hair help, lunch help.. typical stuff for a kindergartener and second grader. Unfortunately, we had a cranky two-year-old bouncing around unhappily room-to-room, even with a cup of tea she was still ornery and unwilling to cooperate. Until she got her hands on her sister’s backpack and lunchbox from last year. She wanted to don a backpack and walk like her siblings, too.

She wasn’t supposed to walk. She wasn’t supposed to carry a backpack, she was supposed to just ride in the stroller so we could walk at a good pace. Instead, she insisted I leave the stroller home, huffing up the hill near our house, hurling the pack over her shoulders, readjusting and pointing. She didn’t want me to carry it, but she slowed to a snail’s pace trying to readjust and cope with her little legs trying to be bigger than they were, like her siblings.

I was huffing, we had time to get there, but at this pace, this was no morning exercise for me, especially needed after the turmoil already for this Wednesday. But then she locked hands with her siblings, and giggled as she marched along with them, and I couldn’t help but melt into a puddle behind them. 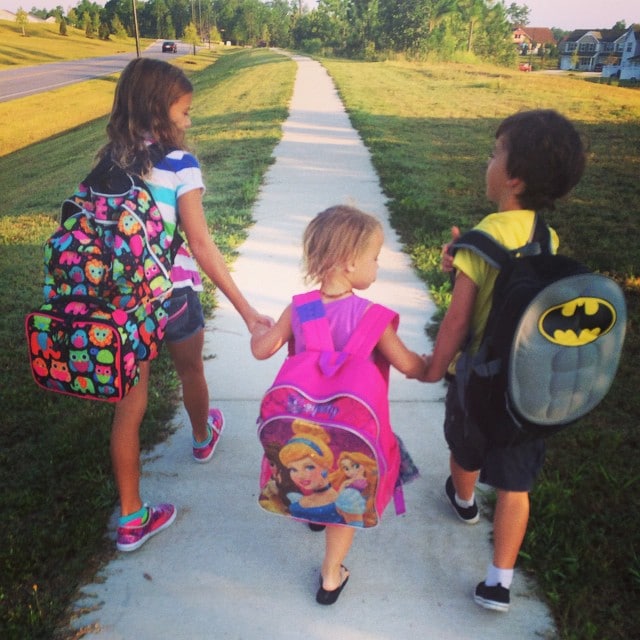 So what, I didn’t get a ton of exercise that morning. So what, my morning started off a little slower and weirder than normal. Last week’s Wednesday proved to me that, even on my #happinessis Wednesdays, happiness can still be found, even in the oddest, most stressful situations.

This week’s Wednesday (yesterday) was no different. I fell asleep super-early Tuesday night (like, just after dinner, as I was putting the baby to bed kind of early), only to wake up on time for the kids/walk them to school/get home/walk the dog to finally sit at my computer only to encounter a freaking VIRUS on my MacBook Pro. (Can you believe it?) Pop-ups flying everywhere like flags in the wind. After only a few (eleventy-billion) hours of scanning, did I find, remove, and NUKE the virus so that it could be used again. I still have NO CLUE where it came from, I didn’t download anything but updates for my Mac (like the new iTunes) from the app store. *insert puzzled face here*

So, TGIT (Thank God It’s Thursday). Because that means it’s NOT Wednesday anymore, and only 6 more days until Wednesday tangos with me once more.