We are a HUGE Hasbro-lovin’ family. Our Nerf love is strong in this home with 3 boys. This is how our old porch used to look on any given day:

While we might not be able to break out the water guns or anything because it’s winter, but our Play-Doh lovin’ selves stay busy despite the cold weather. Frigid temps won’t stop us from having some good, old-fashioned fun time around the house with these Hasbro favorites! Why not consider putting these under the tree for your family this holiday.

My Little Pony fans can discover the newest royal empire inside this Friendship Rainbow Kingdom castle playset – a grand three level palace fit for a pony princess! Use the friendship keys to unlock a number of magical accessories within the kingdom, including a wardrobe, vanity, book, and treasure chest. Pony friends can travel the kingdom in style on the rolling cloud car, taking a ride down a fun swirly slide. Stops along the way include a lookout tower, golden balcony, swing, and more. Includes Princess Twilight Sparkle figure, key, cloud car, and themed accessories. Available at most major toy retailers nationwide and on HasbroToyShop.com. $39.99, ages 3-and-up.

Pop the bubble to save Olaf in this Disney version of the classic TROUBLE game! You can play this game as your favorite Frozen character, and your job is to travel around Arendelle to save Olaf. But watch out for the avalanche! Pop all around the board in the Olaf’s in Trouble game – it’s a game worth melting for! $14.99, ages 5-and-up.

It’s layers of fun at the Cake Mountain playset! With the new Cake Mountain playset there are tons of ways to make amazing cake creations. The fun starts at the top when you load one of three different cake molds with Play-Doh compound, then ‘press and pop’ to make your cake! Use the half molds on the playset to add fun details and Play-Doh treats, then pile on the Play-Doh Plus frosting! Separate the bottom layer to uncover more half-molds and fun ways to play – it’s two play sets in one You can even decorate the outside of the Play-Doh cake, adding colorful plastic candles or turn them into Play-Doh lollipops! Set includes an extruder, six candles, a knife, a fork, two plates, three 2 ounce cans of Play-Doh compound and two 2 ounce cans of Play-Doh Plus compound. Available at most major toy retailers nationwide and on HasbroToyShop.com. $19.99, ages 3-and-up. 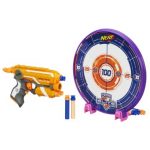 Sharpen NERF blaster skills in between battles with the N-STRIKE Elite Precision Targeting Set. Fans take aim using the precision light beam targeting of the N-STRIKE Elite Firestrike blaster and blast away up to 85 feet at the unique target designed to challenge even the most experienced NERF fans to improve accuracy, speed and performance. Targeting set is great for indoor use and comes with N-STRIKE Elite Firestrike blaster, one Elite target and six suction- cup darts. Available at most major toy retailers nationwide and on HasbroToyShop.com. $19.99, ages 8-and-up.

The NERF Rebelle Agent Bow is perfect for high-profile missions that require accuracy and skill. Release the string and watch as the first ever NERF Rebelle foam arrows soar up to 85 feet across the sky making a whistling sound! For added precision, the Agent Bow features an electronic glowing red dot that provides better aiming accuracy with every shot. The NERF Rebelle Agent Bow comes with three secret message foam arrows, a separate decoder, and a detachable quiver. Available at most major toy retailers nationwide and on HasbroToyShop.com. $29.99, ages 8-and-up.

Get the party started instantly with the new Trivial Pursuit Hints game. Trivial Pursuit Hints is a handheld trivia game with an all new question style that gives players up to three hints to help them answer the question. The fewer hints you use, the more points you get! Pass the handheld unit back and forth as teams take turns answering more than 1,000 Trivial Pursuit questions. The game unit keeps score for anytime, anywhere play. Requires 3 AAA batteries, not included. $19.99, ages 12 years & up, 4+ players

Say it, guess it and pass it fast! Catch Phrase Decades is the perfect game for an instant party. With phrases from the 70s, 80s, 90s and today, Catch Phrase Decades will bring out the party in the whole family! Shout, gesture, and say anything else but the words in the answer to help your team guess before time runs out! The built-in timer and scorekeeper lets players have a Catch Phrase Decades party anytime, anywhere. Requires 3 AAA batteries, not included. $19.99, ages 12 years & up, 4+ players

Have an instant party anywhere, anytime with the new Taboo Buzz’d game. Classic Taboo gameplay in a handheld game unit gets the party started instantly. Race against the clock and get your team to guess as many words as they can to earn points. You can say anything you want to get your teammates to guess – except for the words on the screen! If you say one of the “Taboo” words, the other team hits the buzzer on top of the electronic unit and they earn a point. The game unit, which has more than 1,000 words, keeps score as teams pass the unit back and forth. The team with the most points at the end of each round is the winner. Requires 3 AAA batteries, not included. $19.99, ages 12 years & up, 4+ players

Which are your favorites from Hasbro?