We were stationed in Louisiana for three years and met some of our most bestest friends while living there. There was absolutely NOTHING like fresh homemade beignets, Mardi Gras, and feeling the “soul” of New Orleans. New Orleans had a similar feel to the streets of New York City – you could literally feel the pulse of the city being on the streets there, it was just so alive, you know? While I didn’t love being stationed at Fort Polk, we sure did love traveling in Louisiana and visiting Natchitoches (pronounced Nack-a-tish), Lake Charles, and Alexandria. I love remembering and recreating some of that familiar Louisiana flavor at home, like with these homemade King Cake Doughnuts.

Real Louisiana King Cake is usually made with a rich Danish dough thought to be similar to a coffee cake with cinnamon and pecans usually. It’s baked and then decorated with frosting in Mardi Gras colors: purple represents justice, green represents faith, and gold represents power. You might also find King Cake recipes out there with fruit or flavored cream cheese fillings inside too depending on the baker. Either way, they are ridiculously good!

This King Cake Doughnuts recipe pays homage to the original King Cake recipe by using a from-scratch homemade cinnamon cake dough that is baked and frosted with Mardi Gras colors similarly to the way a King Cake is normally decorated. We didn’t include the little baby inside the doughnuts, though. We just set on the side because he’s cute.

The baby found inside the traditional King Cake usually symbolizes luck and prosperity to whomever finds it in his/her slice of King Cake. Typically, that person then becomes responsible for throwing next year’s Mardi Gras celebration, or is responsible for purchasing next year’s King Cake. Some people traditionally consider the one who finds the baby should be designated “King” or “Queen” for the remainder of the evening.

You will find this King Cake Doughnuts recipe is absolutely heavenly! A gorgeously spongey cake doughnut baked from scratch and is gloriously cinnamon-y in every bite! The homemade icing is just a simple glaze that adds to the beautiful flavor and allows for the doughbuts to be decorated with the colored sanding sugar.

This recipe yields twelve doughnuts and is easily double-able or triple-able should you need to make a lot for a gathering or Mardi Gras celebration with friends! With how delicious these doughnuts are, you might have to make a lot! I know my kids go through these like crazy!

This gorgeous King Cake Doughnuts recipe pairs ridiculously well with a great cup of coffee in the morning. I drink Hazelnut coffee everyday and the two pair magnificently well together! So yum! These also go well with a hot cup of tea, too! You can never go wrong with these cinnamon treats and your favorite hot beverage, even hot cocoa! Even if you’re not having a big celebration, celebrate Fat Tuesday in style with this awesome celebratory breakfast!

Can you even with this gorgeous from-scratch doughnut recipe? That sponge-like cakey doughnut right there is freaking calling for me to make it again for my family! Ugh, they are almost too good, haha! It’s just so yum and glorious and it’s such a wonderful treat to celebrate before Lent and Ash Wednesday, don’t you think? My friend Mel’s Cinnamon Biscuits are also pretty delicious, you should check it out!

Definitely splurge-worthy, you will want to make these King Cake Doughnuts every year to celebrate Mardi Gras/ Fat Tuesday! Bring the kids in on this one, too! Easy for the littles to help, this easy homemade recipe is fun for kids. They can help with sifting, with mixing, with the glaze, and the best part – the decorating!

How to Make King Cake Doughnuts

To make these gorgeous King Cake Doughnuts, you will need the following ingredients:

You will also need the following tools:

Preheat oven to 425 degrees. Sift your flour, cornstarch, sugar, cinnamon, baking powder and baking soda into a large mixing bowl. Whisk them together until they are well blended.

In a separate bowl, whisk together milk, eggs, melted butter and vanilla extract until the eggs are broken and all ingredients are well blended.

Pour the wet ingredients into the bowl with the dry ingredients and mix with a spoon until well combined.

While the doughnuts are cooling on the wire rack, prepare the glaze by combining powdered sugar and milk in a mixing bowl. Whisk both the ingredients together until they are combined and a glaze forms. Be sure all the powdered sugar was mixed in and there are no lumps so that the glaze goes on smoothly.

Dip each donut in the glaze to cover the top half. Set each doughnut back onto the cooling rack to let it drip. Only do a couple doughnuts at a time.

Right after dipping, sprinkle the purple, green, and yellow sanding sugars over the glaze while it’s still wet so that it sticks and stays on well.

Continue frosting then sprinkling each doughnut until every doughnut has been covered. Allow all the doughnuts to dry and set before serving.

What do you think of this King Cake Doughnut recipe? You’ll find detailed measurements and instructions below. Do you think this would be something fun to make for Mardi Gras this year? Be sure to check out our other doughnut recipes, breakfast recipes, and dessert recipes while you’re here! Enjoy! 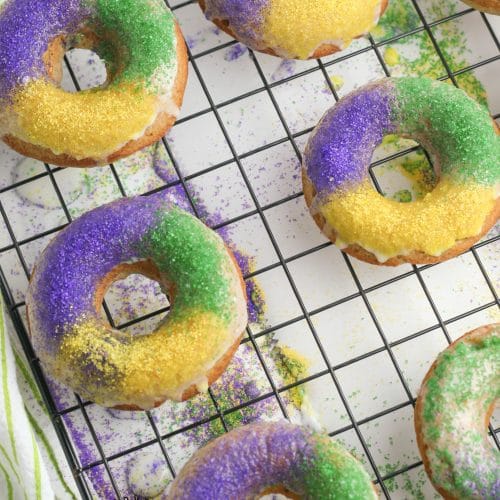 Tried this recipe?Tag me to show me @crazyadventuresinparenting and/or use #MadeItLikedit to be featured on Pinterest!
314shares
Previous