Our five-year-old son is a video game addict. Whenever a video game is on-screen, even if he isn’t playing it, he loses all mental capacity and stares blankly at the magic box. Sometimes I swear he drools, or something. In an effort to curtail my son’s attempts to mainline the Wii or Playstation, we’ve drastically cut back their usage of video games, much to his dismay. I am beginning to think we might have made a tiny mistake in that department, as he’s decided to wage psychological warfare on us (you’ll see in a minute).

To preface this story I would like to announce that I, just like my wife, am deeply and horribly terrified of just one thing (okay, we know she’s afraid of more things. Okay, maybe I am, too). Yes, I am a grown man, a soldier that has seen combat, one who routinely throws himself out of perfectly good aircraft from thousands of feet in the air. But this? This scares the living schnikes out of me… 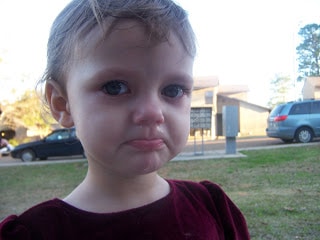 See that face? This young lady is a daddy’s girl. I cannot leave the house, cook dinner, or you know, function without her underfoot. If I leave her, the above face happens, or worse, and she proceeds to make our lives a living hell. I’ve been to combat. What she does is way fricken worse.

(I live in a house with four girls. I know I have absolutely no say in my actions, I’m in charge of what my girls allow me to be in charge of. I’m a good servant husband.)

Now, yesterday, I hit the snooze button one too many times, because I was forced to watch my wife’s new show, “More to Love” the night before, and I decided if I had to watch this God-forsaken show, then by God I will have fun doing it! So I’ve made it into a drinking game. Every time a chick cries? SHOT! Next week I’m upping the ante, though, so that whenever someone on the show says the word “amazing” or “loves me for me”.. SHOT! I think it’s a fair compromise – she makes me watch this crap, I get hammered. All is fair in love and DVR!

Anyways, as I said, because of this new fun game, and my one-too-many times hitting the snooze button, I realized I was going to be late. I woke up, snuggling my girl (no, not Lisa, my youngest daughter. I already told you I can’t do anything without her) to the sound of weird mumbling at my feet. My five year old son. Holding a video game case. Talking to himself.

I immediately “ssh”-ed him as I realized that I was not only cuddled with my two-year-old, but that she was fast asleep, laying on my left arm. And I had to go to work, like, right now right now. Recalling back to my misspent youth, I quickly surmised I was in the classic Coyote Ugly situation (guys, you know all about all-too-well, right?). I had the choice of either waking her up trying to escape having to deal with the ugly aftermath, or chewing my arm off so I could leave out of there as quickly as I could. With much wiggling and pleading, I managed to wriggle out from under her head without waking her. Or chewing off my appendage. Sweet!

As I hurriedly prepared for my morning ritual of shaving my face and beating my head against a wall (for all who’ve ever been stationed here, you know where I’m coming from), my son, about five decibels too loud, announces that he “really wants to play Justice League on Playstation.”

“SSHHHH!!” I snapped to him immediately, “Don’t wake your sister and ummmmm no video games son.”

“But I promise I’ll take care of the games and listennnnn..” little man responded, whining, sing-song-like which, to me, sounds like nails on a #$(#*$% chalkboard.

His plea was met with an intense stare and another sharp “SSHHHH!!” At this point, I still thought I might’ve been able to get dressed and slip away before my daughter woke up. But of course my son, who probably felt that I should take pity on him, began to pout, much like his sister did above. But loudly.

“Awwww man, I never get to play video games!” He bemoaned in a not-so subtle or quiet way.

Now, I will never know exactly if it was that statement that caused my little sleeping angel to wake, or if it was the noise from all of my fierce attempts to keep his big mouth quiet. Or perhaps, being the torturous sweet little bully girl she is, maybe she sensed her brother’s misery and simply woke to drink his tears? The world may never know. What I do know, though, is that just I was about to slip down stairs I heard “Daddy? I go bye bye wit you?”

Ah, my son is mastering all too well the game of psychological warfare, as is my toddler, it seems. If at first you don’t succeed, enlist the help of your sleeping, harassing sister! {face palm}