(I’m forewarning you right now, this post contains ‘colorful’ words. I usually, artfully, fling a cuss word around or two every so often. But this!? This, my friends, is something else.)

We’ve been living here for two years. It hasn’t been the most glorious of years or anywhere near it (to say the least), but we’ve done our best to attempt to make it work, despite horrible school issues in the past.

Last year, our then-kindergartner was sick. A lot.

It was his first year of school and we found out the hard way that he’s just going to be “that kid” – the kind-of child that catches e-v-e-r-y-t-h-i-n-g going around. We spent an awful lot of time last year nursing him back to health. He’s also the same child who is struggling with being underweight and small in stature for his age, the one that has underwent cancer testing, bone-scans (and has come out “younger” than his physical age in that respect), the one that has developed asthma while living here, the one we’re working hard to get healthy and what’s considered “normal” for his age. The child we are facing who will, more than likely, be sick again this year. And we’re prepared to treat him, to get to the bottom of it all, and make him healthy and strong.

But nevermind all that, nevermind the hard work, mothering, vitamins, protein shakes and keeping him home “to be safe” when he isn’t feeling 100% because I didn’t want to infect his classmates or teacher or get him sicker by exposing him to even more germs from others. Nevermind all of that now, because if we don’t go to the doctor for every sniffle, every cough, every fever and obtain a ridiculous, tree-killing piece of paper for every time we keep him out of school, or are late to school (or pick him up early from school), we could face prosecution.

Yes, friends. In black and white, the Vernon Parish School Board (aka Old Idiots Who Love to Torture the Parents and Military Alike) have written, photocopied, and distributed throughout their public schools their decision to, yet again, screw the military and parents once more. But this time, this isn’t just failing a child for absences, nor is it telling parents they’ll owe court fines or do community service for excess tardies. This time, it isn’t holding a child back for not passing their state standardized test despite their good grades, or for the archaic wish to continue with corporal punishment. This time, it’s JAIL TIME FOR ABSENCES! 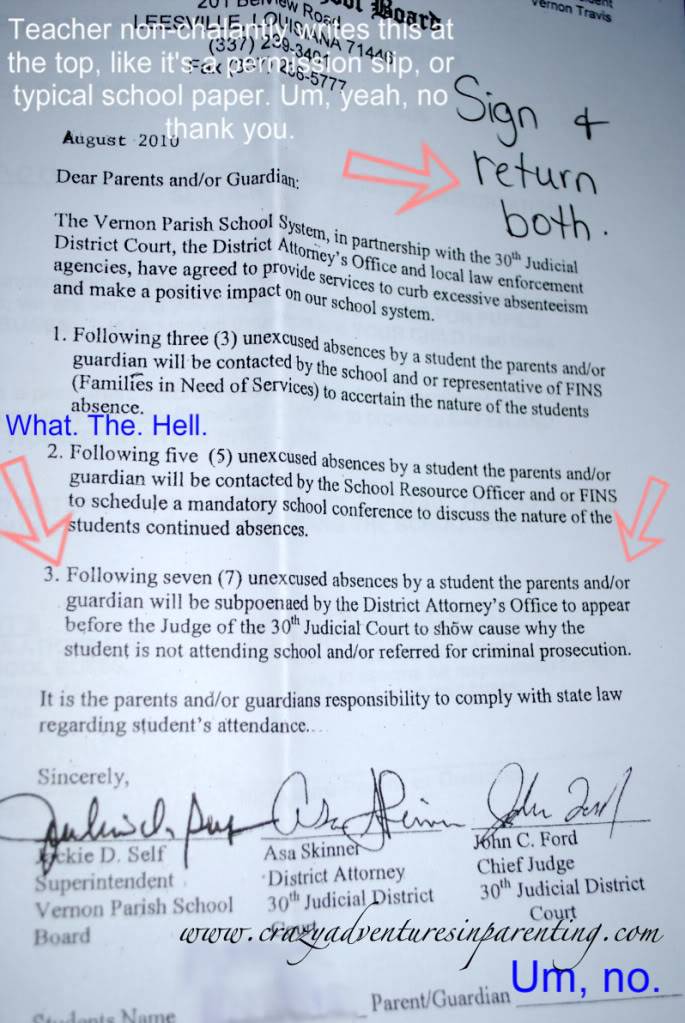 Oh hell no, I’m not going to stand for it.

Let me ask you, school board, were you ever military? Did you ever serve our country in our Armed Forces? Do you know how devastating a deployment can be for a family? You mean to tell me you are mandating a mother to send her traumatized child to school, who might need an occasional day of extra “mommy” time, cuddles and love? A child desperately needing hugs and encouragement in the comfort of their own home, or their wanting to be there when mommy received daddy’s first call. What sort of doctor’s visit would that fall under? Hmm? Sorry, kid. That isn’t an excused absence, so you have to go to school or face an F for the day, not make up any work, and be one check-mark closer to your mother going before the judge.

What about when daddy is deployed overseas, and it’s just mommy and many little ones, a mom stricken with constant worry and strife, battling to manage it all while her husband is battling for his life, and mommy has a head-cold that’s been passed through the entire family, including their school-aged child? A cold that doesn’t normally need to be seen by the doctor, but to appease the ludicrous school board, this tired, worried, sickened mother is forced to clog up the doctor’s waiting room and appointment schedule with her sick children, only for the doctor to have her continue on with over-the-counter remedies and told to let it ‘run it’s course’ – you really want her to pack up the entire sick household, make them sit in the waiting room, only to be seen and told they’re doing the right thing, all for a stupid piece of paper?

Are you f*cking idiots? I mean, can we be a little bit more ridiculous here?

Deployed soldier’s children who are too upset to go to school the day after, crying and upset and want extra mommy time – no sorry, none for you, because we’ll send your mommy before the JUDGE and COURT while daddy’s away, all because we’re mean, unreasonable assholes that don’t give a crap about your family’s issues. Vernon Parish’s standardized test scores aren’t high enough so, we’re forcing you all to attend school even when you’re sick or we’ll send you parents to jail. (Even though, if I can be frank, it isn’t the military kids causing your failing test scores in schools. My tenth-grade daughter, along with her military friends, are the youngest ones in their grade because everyone have seemingly all been left back at least once if not more in their education. Just sayin.)

Or let’s consider our family, daddy is stateside and isn’t deployed, but there are schools that the Army sends him to take him out of state that has to go to (he’s gone twice this year already). You mean to tell me while I’m flying solo with SIX children, I’m forced to take them to the doctors every time, even when I know it isn’t serious enough to warrant a doctor’s visit normally? (Say, his asthma flares up, or he’s got diarrhea and is embarrassed, or something like food poisoning when there isn’t anything you can give him, anyway). All for a foolish piece of paper “excusing” him from attending that day for your records?

I seriously cannot stand this hole-of-a-place any longer.

I can’t stand a place that has to make it incredibly difficult to attempt to live a seemingly “normal” life. We have battled for two years. TWO LONG YEARS in this God-forsaken place that still paddles children, that won’t let me volunteer at school bringing my little ones (children who have not only done incredibly well in all our other schools we’ve been to/volunteered at, but who I wholly attribute their doing well when integrating entering school because they were able to come with while volunteering). A school district that allows teachers to verbally abuse their children that won’t do anything about it, with principals who call parents and children liars for saying so. A school district that places so much pressure on these kids to pass the standardized tests to make these officials look good that they will fail them if they don’t perform well, even if their grades are good enough to pass. I truly and wholeheartedly feel overwhelmingly sad, because this military post and school district has done irreparable damage to my kids and my family by not being adequate enough for our military families in having too little for them to do and being too overly strict for them.

My husband  will be filing an ICE complaint later. (For you non-military folk, it’s the military’s form of ‘comment feedback’ for every service offered. It goes straight to the post command and every complaint is read and dealt with.) I, myself, will be calling the school liaison in a few (a position the former liaison wanted me to do, actually), along with superintendent himself for answers to my questions. But I don’t expect much from the superintendent, he didn’t even call me back after my teacher abuse complaints last year.

Nine more months and counting until we’re out of this hell and off to our next duty station, unless the Army decides to move us sooner. And should it happen earlier, despite it being in the middle of the school year, we’d jump on leaving early in a heartbeat. So would the kids.