The day started off with the morning sunrise shining rainbows through the front door. Then I hear, “Mom? I can’t find my cleats and shin-guards.”

“Look in the bathtub.”

With five of my six children playing this year, Baby Dude felt really left out, so I put him in some of his sister’s old soccer clothes, and despite the fact he was swimming in them, he thought he was hot stuff, matching his big sisters and brothers.

Of course, I had to get the obligatory “First Day of Soccer” photo. Unfortunately, aforementioned morning sun was making them wince like pirates instead of smile like excited children. D’oh! 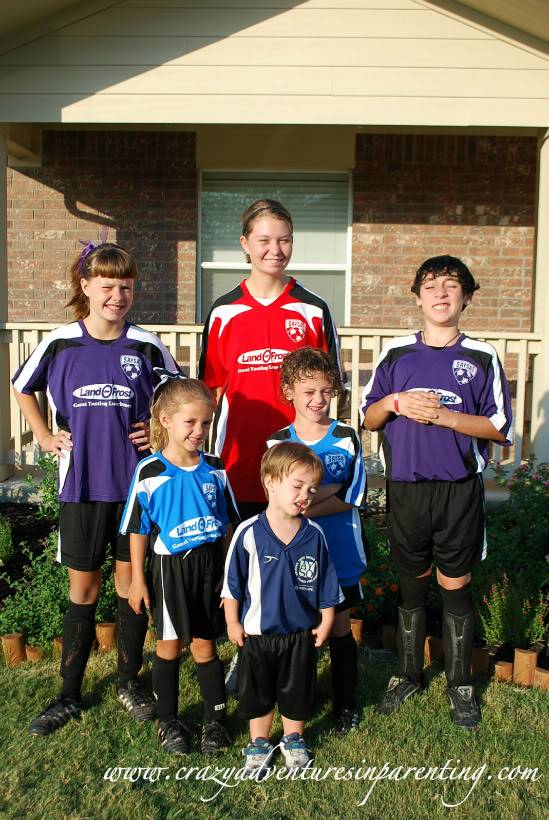 “Babe? Why don’t we face them towards the house, so they can actually smile and not look constipated?” My dear, sweet, brilliant husband suggests.

And we’re off! We pile into two cars – my husband left to meet his team early for their 9:30am game. I ran to Walmart to get ice and stock our cooler filled with eleventy-kajillion bottles of Gatorade and water.

After arriving and immediately getting lost, because the soccer fields are huge! And ginormous! And confusing! (4000 kids signed up for this soccer league, yo!), we finally find the kids, doing quite well despite the heat already becoming a factor. I was super-impressed, they didn’t seem to have lost any ability whatsoever. 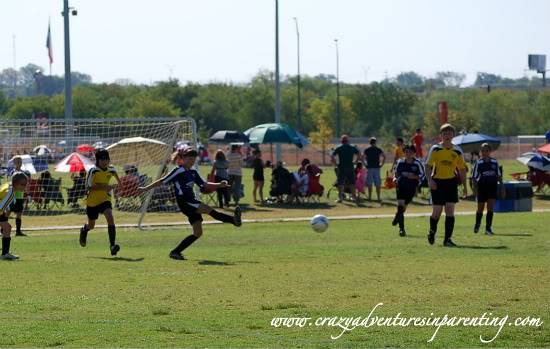 They tie!! And I love that they do the parent’s congratulatory “tunnel” here. AWESOME.

First game done… whew! Unfortunately, it was only 10:30-ish by this time, and we had about an hour break until the next two games at 12. We sat in the shade, drank assloads of Gatorade, made PB&J sandwiches, and hung out, doing our best to stay cool.

First up – my second-grader Super M, who was a liiiiittle too eager to play, he blew off his team’s cheer. Whoops! 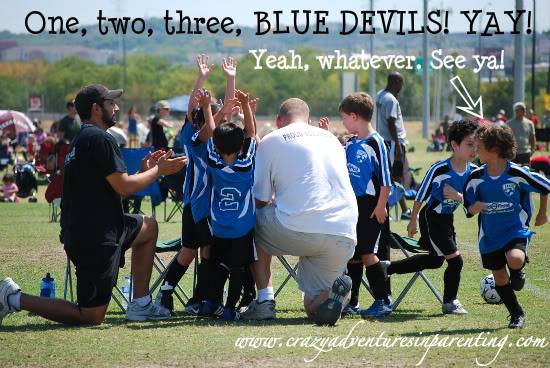 He got tons of practice throwing in… 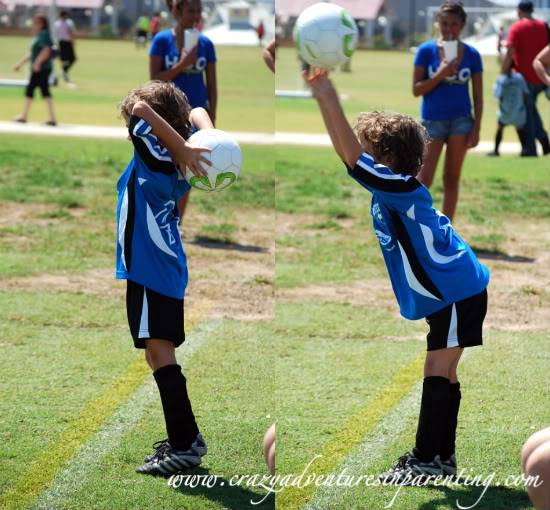 And even scored a goal, too! 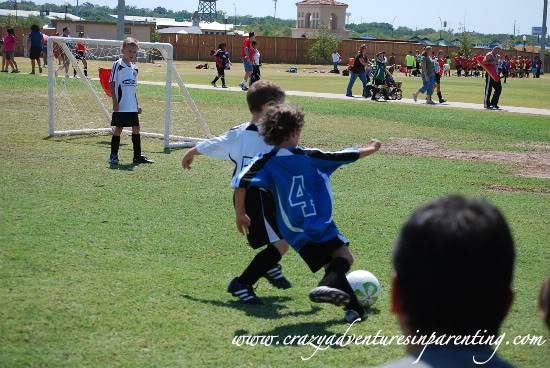 And poor Baby Dude was missing out on all the excitement. 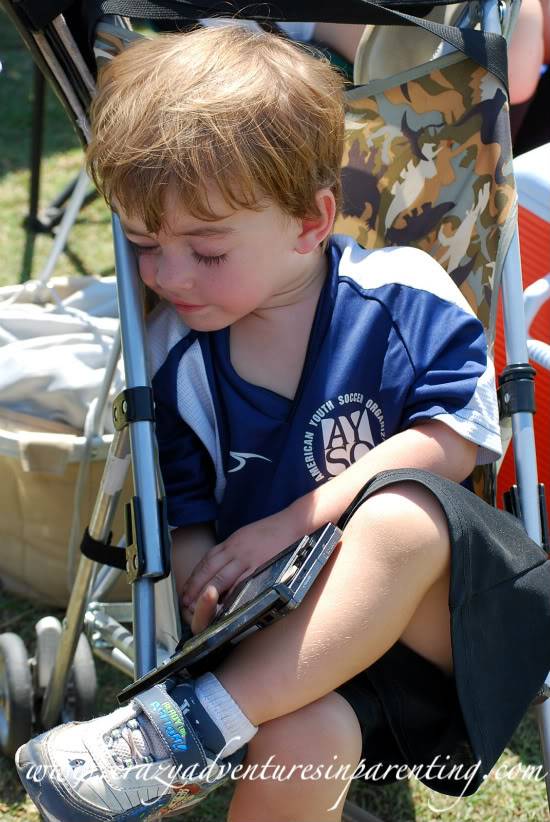 Meanwhile, on a teeny field nearby, my four-year-old, Baby Sis, was rippin’ up the soccer field herself, scoring two goals before I even got there. I joined her game as she was sitting, every so Little Miss Muffet-ish under someone’s green umbrella. 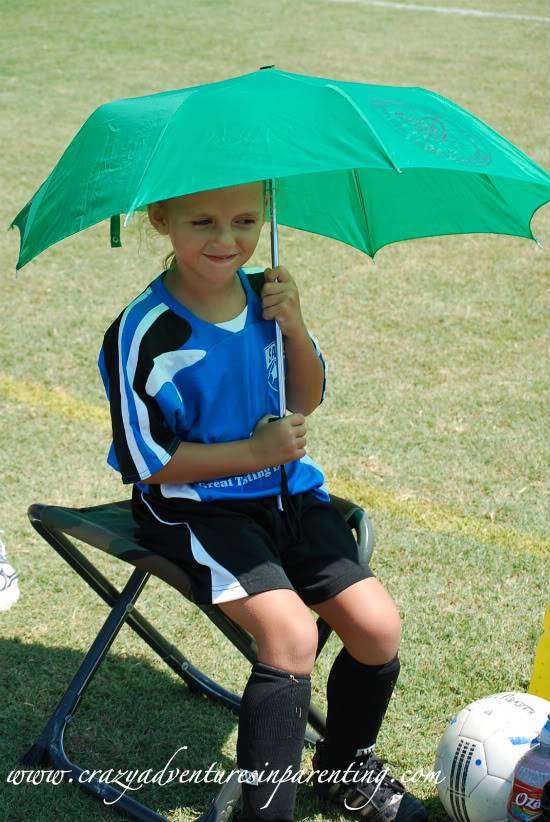 Another child came off the field, and she generously shared the umbrella with him, but for whatever reason, felt the need to shoot him the “stank face” (I think she’s in the “boys are icky” mode). 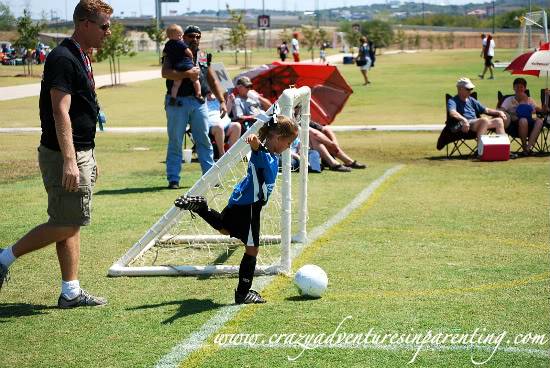 And another parent tunnel, yes!

The noon games finished up around 1:15, leaving us some in-the-shade-time at the concession stand again until our oldest’s 2pm game. By this time, we were all feeling it.

Her coach played her the entire heat-zapping game – first half as a mid-fielder, second half as the goal-keeper. 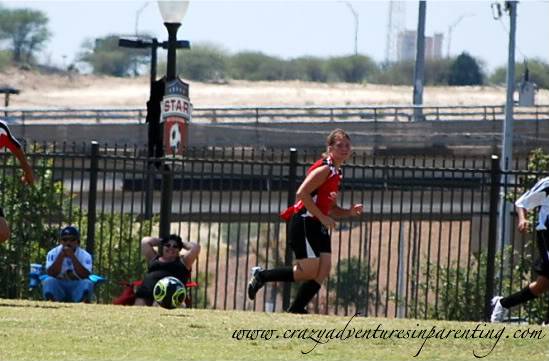 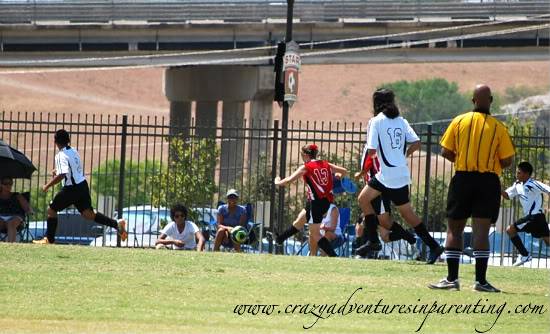 And they tied, too! And it was a gooooood game. All these kids have a lot of heart.

I tell ya, when we got back to the car at 3:25pm and turned on that air-conditioning, nothing ever felt so wonderful to me than my car’s seat and air in my face.

First day of soccer was a success! Unfortunately, Baby Dude ended up with a 103 fever, though..

At the Crossroads of Crying, Hyperventilating and Insanity: The Joys of Womanhood

Remember 9/11? Sure. How About Remembering to Live, Too