Today, as I celebrate being thirty-five years young, and (not) celebrating having to check off the 35-44 category on questionnaires now (instead of the 25-34 category), I am proof that you’re never too old or too young to keep learning new, valuable lessons. Even on your birthday.

Yesterday, when my husband took (most of) the kids out of the house (I imagined, in search of a gift for me for my birthday), I had a house filled with nothings and silence that I had no idea what to do with myself. I strapped on my (too tight) compression pants and a pregnant belly-exposing tank-top, and began cranking in some miles on the elliptical, having been way too long since the last time I’d set foot on it.

I wasn’t even on it for a .1 mile before one of my sons came in with an argument. I stop.
After his issue was fixed, and I restart the elliptical and DVR, another son comes in with HIS problem. I stop. Again.
And then his problem gets fixed, and I restart the elliptical and DVR, huffing and puffing in aggravation and now, instead of a relaxing, “Time for me” workout, it’s about releasing aggressions and painful reminders to myself why I haven’t seen the dang thing in a few weeks.

The doorbell rings. Surely, it had to be one of the neighbor kids, I thought to myself. “DAMN IT! NOW WHAT!?” I let out in a loud yell, infuriated and aggravated.

I huff and puff my way to the door, sweat forming, towel around my neck, practically marching when I approach my glass door and see it’s a blonde woman with a button down blouse I don’t recognize. I open the door.

“HAPPY BIRTHDAY!!” She says to me, smiling.

My look of WTF turned into a look of shock.

She had, in her hands, a beautiful bouquet of flowers with a bright orange card. I was suddenly heavily embarrassed by my anger and frustration. “Thank you,” I stammered, peeking behind her to see a familiar mom-type minivan with a small person peeking out the window, waving, helping her mother with deliveries.

Tears welled up behind my eyes, as I hid them from her while looking down at the bouquet in the beautiful heavy purple vase (my favorite color). I thanked her again and closed the door to let the tears fall. I hadn’t even opened the card yet.

This morning, my toddler tried waking me to tell me she was hungry. I couldn’t tell if she was talking in her sleep or actually wanting to eat. It didn’t matter, though, I had no idea of the time, and since I’m a light sleeper, she had awakened me. I laid there, cuddling her for a while, after finally realizing she was dreaming, wondering if I should just get up or relax a bit longer.

Footsteps came barreling down the stairs. Whispered discussions and opening/closing of the fridge, with an all-too familiar sound of the egg carton opening, and the over-spraying of the pan. Someone boop-beep-booped the house alarm off and went outside, plates shifting, forks whipping up eggs in a bowl, clammering around in the kitchen, despite their whispers and attempts to be quiet, I was now fully on RED ALERT in that my two eleven-year-olds were fixing eggs, and my oldest was the one outside to feed our neighbors dogs while they were away.

I stretched my leg over to a sleeping hubby, jabbing him in the leg with my toe, whispering softly but firmly, trying my best not to wake Baby Sis on my left arm, and Baby Dude on my right, both leaning on me. Finally, he stirred. “Babe, can you check on the kids? I’m pretty sure they’re cooking eggs without supervision.”

His eyes weren’t even open, but he sat up, releasing a tired sigh, slumped over as he stammered, blurry-eyed into the kitchen. I heard his supervisory tone, and more dishes and forks and things happening. Minutes later, he appeared and laid back down. I tried whispering back and forth with him about what was happening, when Baby Dude woke up.

The conversation didn’t last long, my husband tried his hardest to fall back asleep, but the overpowering smell of pancakes suddenly had me concerned again. “Babe? Are they making pancakes, too!?”

He bolted upright and into the kitchen as fast as he could. It was undeniable, the familiar smell of pancake batter, and neither child had any clue what they were doing. The dish-clanging was much louder, now, as were the whispers and sink running and “OH, WHOOPS” type responses I heard.

Moments later, standing before me, were two bright-eyed, wide-smiled eleven-year olds with a green kiddie plate filled with scrambled eggs and cinnamon toast they made for me. “Happy birthday, mom! We made you breakfast in bed!” 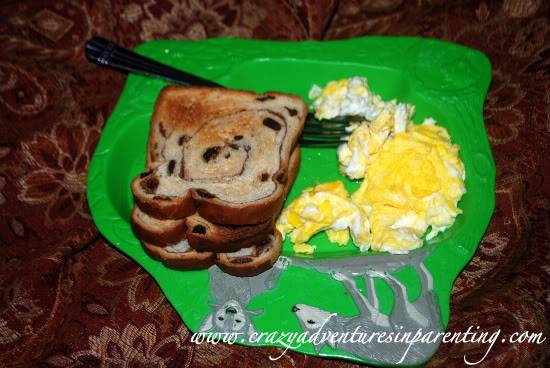 Baby Dude began eyeing my eggs, and Baby Sis, now awake, snagged a piece of raisin bread toast. (The kids had made me three slices.)

I never got to enjoy what they made, as it was picked off by my hungry toddlers, and I never got a waffle, because my son was trying to create his own recipe to make just.one.waffle. and added about twice as much milk as he should have (my husband told me he was stirring a bowl of lumpy milk trying to make it happen), but I truly appreciated their effort in wanting to make me breakfast for my birthday. They later confessed they’d actually wanted to stay up all night to do it. (Holy scary thought, Batman!)

Mom’s never-too-old birthday lesson learned – things are not always what they seem, and definitely not always the worst thing you’ve imagined. (But mom’s instincts are dead on – yes, your kids were trying to burn the house down. They ran the toaster oven with plastic and paper still sitting on top.)

It might not be the most perfectly executed birthday ever, but it’s always perfect when my family is celebrating it with me.

Why Layaway Rocks My Socks