“Yes, baby. She did.” I tiredly replied, my voice almost wailing in response.

But in my head? I answered her question with a four-letter word and a bit more snark. Why? Because this newborn, breastfed poop thing? It doesn’t stay in the @#*($&@#*$& diaper.

Never in the history of ever have I had a child that craps out of her diapers as much as this one. Seriously, I don’t mind the frequent diaper changes, but the constant OUTFIT CHANGES? With a squealing, hates-to-be-cold-and-undressed newborn? It is n-e-v-e-r-e-n-d-i-n-g. I feel like I’m torturing this kid, which makes me feel like I’m failing her.

I glanced at the clock as I snapped the last snap on her clothing, and I probably shouldn’t have. It read eleven in the morning, which meant this was now the third diaper change and second outfit change today, two having occurred in the last 30 minutes.

My second-grader was late this morning.

He was late today because his teacher put a surprise in his binder we never saw on Friday when he came home. A surprise metric crap-ton of papers he needs to finish before getting zeroes on all these assignments he never finished in class, as she has to hand his third quarter grades today. Unbeknownst to us, there sat this mega-packet of work to complete all weekend, and we never knew. This morning he did it, though, thank goodness.

I believe my newborn installed an alarm under my desk chair upon being born.

Every time I sit at it in an attempt to catch up on mail, write a post, or anything desk-related, she begins wailing like a car alarm. I’m pretty sure this invisible alarm she installed, which works like a dog whistle (in which she can only hear it), will be the sole reason for my losing all the baby weight, with all the up/down/up/down’s I do as a result of it sounding off.

My husband knew how frustrated I was to be unable to sit at my computer, even when I needed to.

“Mom? How much money do I have on my lunch account at school, do I need money before I go?”

“Babe? How much money do we have on the USAA card?”

“What’s the number to that place again?”

“Where on your desk do you keep the checkbook?”

To help solve this issue, he bought me the new iPad last week. I’ve been doing my share of web browsing and writing from it on my couch, where dear Baby V would prefer my in-need-of-a-workout flat butt. However, despite being in her favorite spot, I simply do not have enough hands to operate the contraption.

(I wonder, with the extreme lack of extra arms I need, if I could use the iPad with my nose? Hmm.)

My poor toddler had pooped and the baby was so fussy, she would not let me lay her down long enough to change him, not without getting purple. I continued to bounce and burp her, soothing in while praying and begging forgiveness from my Baby Dude to be patient, I hoped to clean him up soon enough. (Meanwhile, inside, I’m cringing at the realization that he should’ve been out of diapers by now, as we had been in the throes of potty-learning just before the baby came, and since her arrival, it’s all almost forgotten about.)

Poor dude sat in his poop waiting for me for far too long. I finally laid a blanket down for her to rest in and changed him, only to find his butt was red from sitting in a dirty diaper too long.

And the kicker? The baby was happily looking at the world on this blanket in the middle of my living room. She was not happy on my lap, nor in my arms, nor in her bed or her bouncy chair or any other place she sits normally, but flat on her back on the floor on a blanket where I was forced to place her was the “sweet spot” without even trying, apparently.

I whimpered silent tears to myself. If I had done this sooner, his butt wouldn’t be red, the baby would’ve been fine and happy sprawled out on the floor, and my arms would’ve had a little relief.

You would think having so many children, it would get easier with each child, having already “been there, done that,” but in fact, it gets harder. Why? Because, these dumb things that happen are SOMETHING YOU SHOULD’VE KNOWN BY NOW, DUH! And yet, there it is, making a mockery of me. It squarely macks you in the mouth with surprise so fierce, you’re left in a bloody puddle of mom-hood flat on the floor, wondering where that sideswipe came from to begin with.

This parenting stuff ain’t for the faint of heart, man.

I had every intention of sharing a picture of our *improved* menu board, now that I went and made it into a magnet for our fridge since repainting. 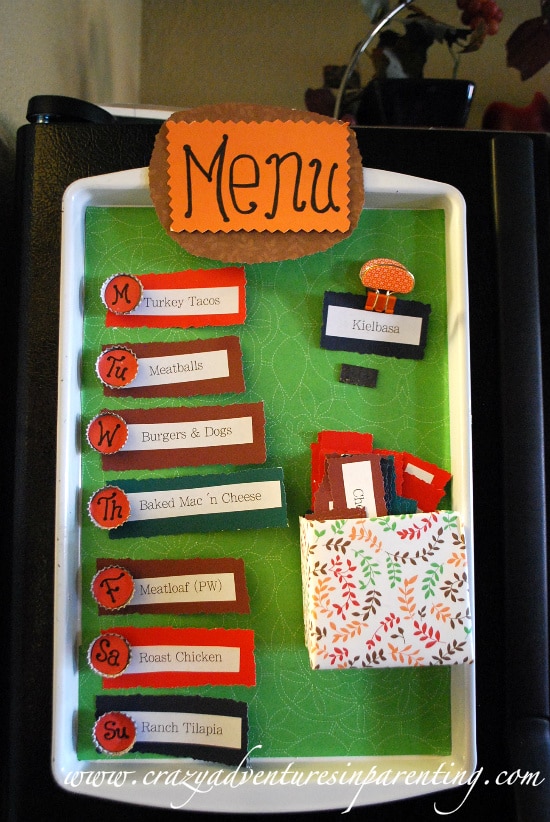 I was going to make *this* week the week I got back to blogging regularly, and getting back into our routine. This week I’m sure I’ll get the ‘all clear’ from the doctor allowing me to work out again. We just purchased a brand new, fantastically awesome double jogging stroller that I can’t wait to start using, and today I woke up at 6:30am with (almost) a start.

But in the craziness of what was already my morning, as I prepared macaroni and cheese with mixed vegetables for lunch, I went to open the freezer door and, as loudly and spectacularly as it could, WHAAAAAAAAAAM!! it clanged and echoed as it hit the floor, exploding magnets and recipe cards everywhere since the menu board hit the door frame, knocking it loose off the fridge and all over the floor.

I stood there for a couple seconds, mouth agape, eyeing the pieces silently stunned, unbelieving. Once I finally picked up the pieces (and my jaw), I realized the “Sunday” magnet was missing, and I’d have to cut a piece of magnet tape until I found it.

I also discovered I was missing one of our dinners the middle of the week, too, suddenly thankful I’d taken a picture of our week’s menu for this post, so I could see which one it was.

Much later, when I finally was able to take a few seconds to look at the picture (above), I realized my goof up, and that the two missing items weren’t missing at all – I put Sunday underneath Saturday, and all it needed was to be rearranged properly.

Once rearranged and fixed properly it hit me. I, myself, could use a little rearranging myself; a rearranging of my expectations. It seems, I am not ready for “back to normal” yet.