Good gravy, people. Yesterday, something happened that gave me chills. Something that practically mirrored what happened almost two years ago, when I wrote a story about a chain of events that happened that made me question my beliefs on whether or not something else is truly “out there.” Divine intervention, if you will.

This story begins before Christmas. I was delayed picking up my kids one day because my husband was home on a day off. It was my first and only time late to get my kids, learning a lesson that day to always be prepared, and never get into that situation again with a plan in place.

Fast forward to last week, a cold front whipped through our state, bringing colder than normal temps. We holed up inside, no parks, no walks, barely playing outside.

A cold front that abruptly ended that suddenly and miraculously brought 60-ish degree temps and allowed us the ability to go out again. We played. We walked. We went to (many) parks.

As the temps rose to 70’s over the long weekend, Baby Dude came down with a stomach bug, forcing us to stay closer to home while he was sick. We devoured the warm weather from the comfort of our home and yard, but until he felt better, no walks or venturing to parks.

And just as he began feeling better, allowing us a small taste of walking and playing at new park along our walk, our kindergartner came down with it late Monday night before school, forcing her to stay home, forcing us to stay close to home again Tuesday, even more-so than we would’ve liked; I accidentally locked my keys in the house when leaving to get him from school that afternoon.

I panicked, but the plan was already created. I called quickly to the school, to have him placed on the bus (thankfully knowing the bus number), but the panic was still there, that similar panic I had from that day in December when we were running late for the kids, except this panic was far worse, because I had no vehicle to get him if the bus had left. Thankfully, it hadn’t. He arrived safely momentarily, joining us in being locked out, but happy to have ridden a bus for the first time in his life. Our plan worked.

Out of caution, we kept our kindergartner home an additional day Wednesday, even though she proved she was feeling much better. So much better, in fact, the joyfulness of the gorgeous 74-degree weather enticed us when we picked up my third grader (without locking my keys in the house this time, ahem). They wanted to go to the park near the school. The park we often frequented when the weather permitted. The park that allowed us a small time to play before the older kids came home. The park that was *rightthere* where all the walkers pass to be picked up or walk home. The park we hadn’t been to in almost two weeks because of weather, time off, illnesses, etc.

We bounded out of the car, desperate for some fresh air and exercise. It had been a rough couple of days with sick kids, and it did my heart good to see my kids healthy and playing normally. I was grateful to be there, and grateful they twisted my arm to go, particularly because of what ended up happening next.

I passed many kids walking home from school, and parked in the parking lot. Faces I see everyday, some meeting parents to drive them home, some walking home by themselves. A couple girls collected by the park and pool while we parked and got out and began to play. The girls, maybe a year younger than my third grader, seemed to be deep in conversation, one talking louder than the next, but my attention was elsewhere. It was on my kids, and Baby V, and her happiness on the slide. 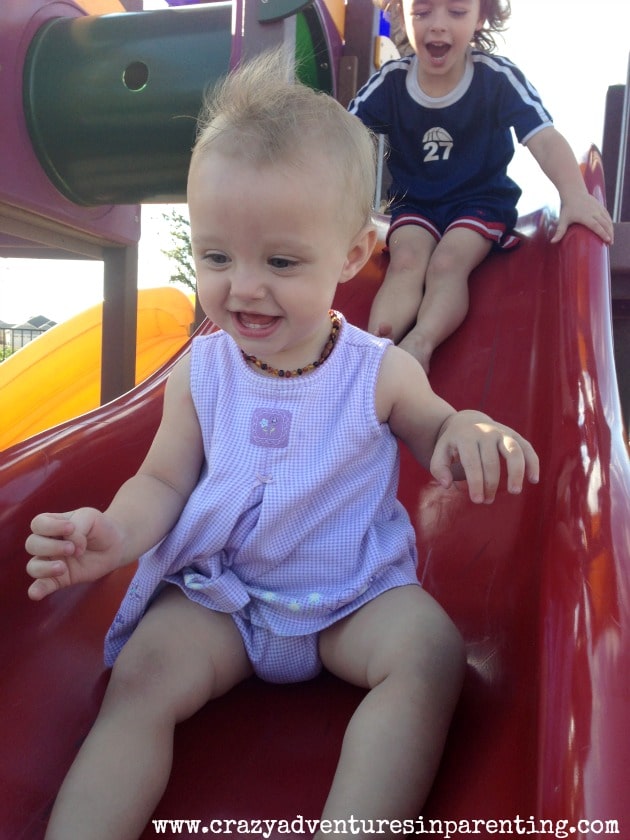 “Excuse me, ma’am?” The outspoken blonde girl came to me. “Can you help us?”

“Of course, what can I do for you girls?”

“Her parents didn’t show to pick her up, can she borrow your phone to call them?” She pointed to my phone next to my keys on the bench.

The forgotten girl didn’t cry, mind you, but she wore her sadness like face-paint, it was unmistakeable and impossible to hide. “Absolutely!” I assured her as my poor heart broke.

I brought her to the bench, unlocked my phone, and gave it to her on the dial-pad  I overheard her conversation with her mother, her voice quivered as she called her mother from a stranger’s phone. “Mommy? Dad didn’t get me.”

They conversed a little before she passed me the phone because her mother wanted to talk to me. But the first thing the mother did was thank me. “Thank you for helping my daughter,” she proclaimed, “I’m so sorry her father isn’t there! I’m about to call him to find him, he must be running late…” her voice trailed off.

I could tell she didn’t want to admit he’d forgotten her, but the disappointment in her tone of voice was evident. “Will you be there? Will you stay with her?”

I assured her mother that I was okay to stay for another twenty-five minutes before I had to go, that my junior high kids weren’t expected off the bus just yet. I encouraged the forgotten girl to play for a few minutes at the park, perhaps with my children, as her father would probably be on his way soon. She unsheathed her bag and jacket onto the ground and joined them, very tentatively, glancing to the road every moment she could, looking for his car.

As promised when we hung up, the forgotten girl’s mother called back to tell me the girl’s father was on her way. I noted to myself silently she never called him her “husband,” but daughter’s “dad” or “father.”

“He fell asleep with her brother, and didn’t wake up in time. But he’s on his way. I am across town, and unable to get her, but he lives just five minutes away..” mentioning a nearby neighborhood that we coincidentally lived in, too.

I reassured the forgotten girl with a smile. “You dad lives in my neighborhood, and he’s coming!”

She didn’t smile back, she just looked to the road again. She couldn’t wait. She did seem quietly enamored with Baby V, though.

Her mother thanked me profusely, and hung up, while I continued to play with Baby V and keep an eagle eye for her father’s car, a gray Maxima. Every motor or noise from the direction of the road caused the forgotten girl to look up. I could feel her anxiety for him to show. I couldn’t shake the familiarity and oddity of the disappointment that hung around her like a cloud.

Moments later, her father’s Maxima showed up. He quickly pulled up in the parking lot, and she ran to him, flung open the door, and got in as I waved goodbye. But it was the strangest thing – he never exited his car. He never came to me, he never shook my hand, no thank you, no “I’m sorry.” Not even a wave from a rolled down window across the parking lot. Nothing.

I didn’t expect what had happened last time to happen this time, but to not even acknowledge the person who has just helped your child? To drive completely away without even a thanks in any way, or wave? That cloud of disappointment that hung around her has stayed with me since she left. Did he just assume people were always around?

And then it hit me. Hard.

Of all the days it had to happen, it happened the day we were better, and it was warm, and cooped up, and desperate to play. If things hadn’t have happened the way they’d happened, I wouldn’t be in the very spot I was, that moment, playing at the park with my kids, to be there for this forgotten girl when she needed someone to help her home.

It never occurred to her to go back to the school if she wasn’t picked up. No other adults stopped or were around, it was just me. Just. Me. Had it have been a day earlier, with no car or keys, or another sick kid, I wouldn’t have been there for her. I couldn’t stop silently saying, “Thank God!” or “Thank goodness!” to myself in my head over and over.

And then began the thoughts of my place in this world. Having seven kids, an Army wife, having helped my mother run a daycare many years back, always being everyone’s second “mom” wherever we go. I’m the one who coached kids soccer and would stop play to tie shoes, or feed kids water (somewhat illegally) while the game was still going in the heat. I’m the one who winces while watching football when any kid gets hit, concerned for everyone’s safety, opposing team or not. I’m the parent volunteer at school that all the kids hug when they see. The parent who advocates for their lunches in the lunch room. The parent they stop on the side of the road, “Hey, you’re Super M’s mom!” with waves and hugs because they all know me. I’ve always been the one who looks out for all kids, everywhere, treating them as though they’re my own. It’s second nature for me. Kids are small, they’re still babies in this world, and they need our help. It takes a village, y’know?

This second, strangely similar incident has made me realize that I need to lead with my gut more often. I need to keep my eyes even more open around me more often, too. It seems, among being a wife to my husband, the mother to my own, everyone’s “mom” and friend, I’m seemingly designated the lost child helper, too. And I’m honestly okay with that. Anything for kids safety.

I still have chills.