Yesterday’s temps were delicious. I ran 4+ miles yesterday, and we spent the day, as much as we could, outdoors drinking in the cool, fall weather.

In the afternoon, we chose to go on a family bike ride. My oldest son stayed home to watch over Baby V who was napping off a raucous morning. Wanting to make it an easier ride than normal, we decided to go in the opposite direction, and instead of going UP eleventy-billion hills, we coasted DOWN them, happily enjoying the overcast day and slight wind.

Just as we just passed mile 2, and were coasting on our street to finish, up ahead I saw my daughter stopped on the side of the road, waving at me frantically. My husband and newly five-year-old were well far ahead. I suspected she had something caught in her wheel spoke, until I came within ear shot of her – “He’s riding with only ONE training wheel!” she screamed as loud as she could to me while waving his missing training wheel he’d left behind.

I quickly glanced past her as I came closer to her fixed position – there he was, coasting and breezing on down the hill some more, COMPLETELY OBLIVIOUS to the fact that he only had one training wheel on! He was DOING IT! He was BALANCING ON HIS OWN!

I told the girls (since my six-year-old had been my right-hand bike mate) that I was going to leave them and speed up to catch up to let my husband know what’d happened, especially to forewarn him in case he reached our house and decided to stop. I was afraid he’d find out about his missing training wheel on his own in a no good, very bad way (by crashing).

Unfortunately, it was already too late, my husband had looped around and over to my dude, who bit it on the sidewalk. Thankfully, my tough dude was completely okay. I started yelling to hubs with the HUGEST smile on my face, “BABE! Did you see!? HE WAS RIDING WITH ONLY ONE TRAINING WHEEL!”

We both giggled. And then we enlightened our dude as to what had happened. “DUDE! Look at your bike! You just rode that entire hill on ONE training wheel! You can balance on your own now!”

He was SO surprised, so completely shocked and proud and in awe, he just sat there, eyes widened, mouth agape, staring at us, his bike, the missing training wheel, and back at us again. And what he said next made me even prouder. “Take the other one off, mom!”

And we did.
And he did it.
It took barely two tries.

Just barely five years old, and this kid is a TWO WHEELIN’ BIKE RIDER! Just like his sister! 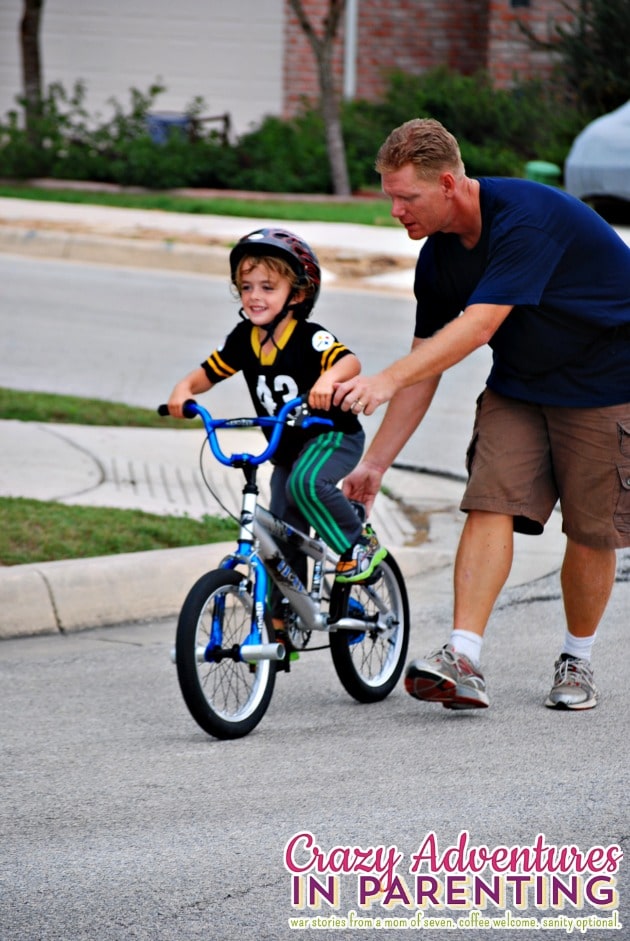 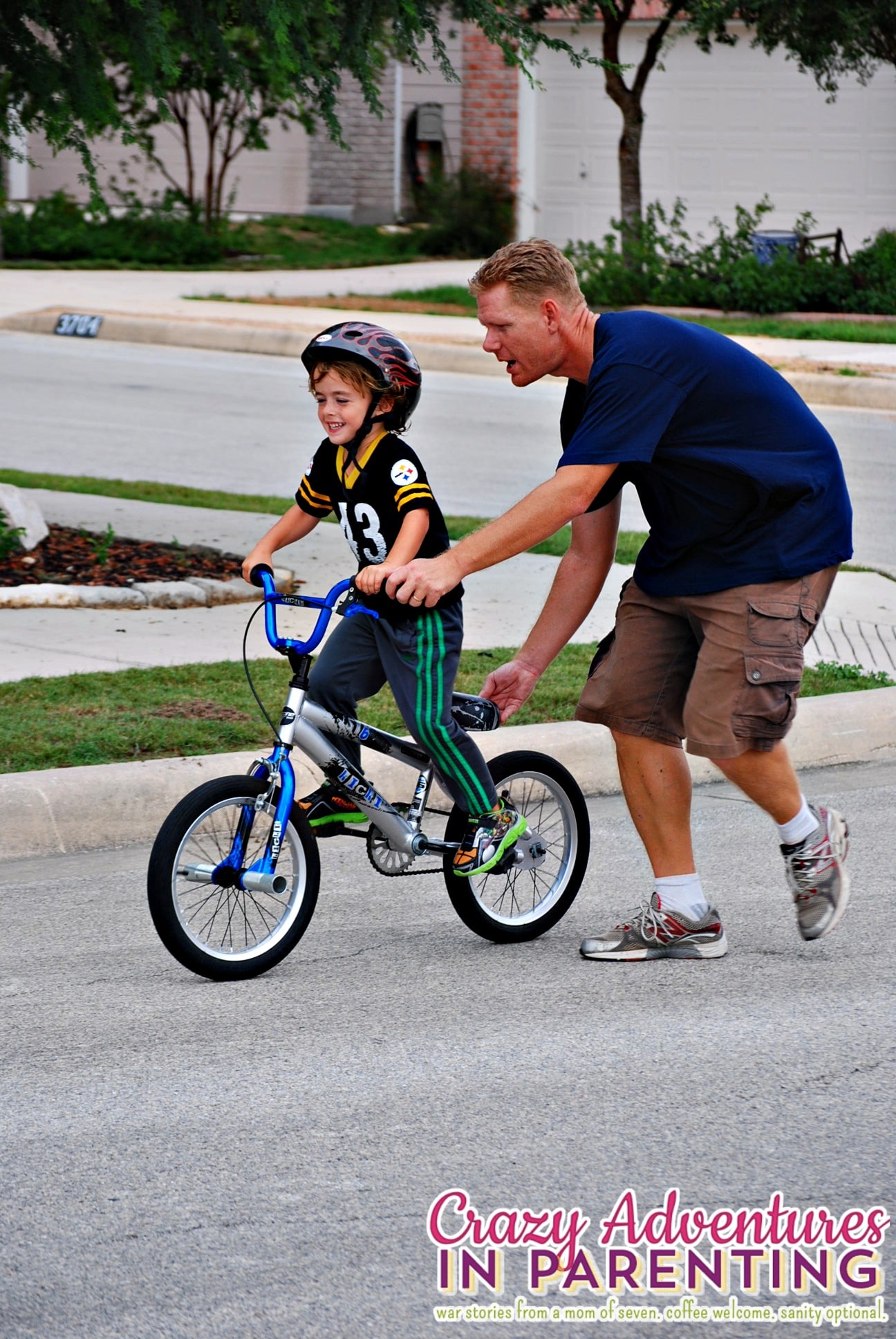 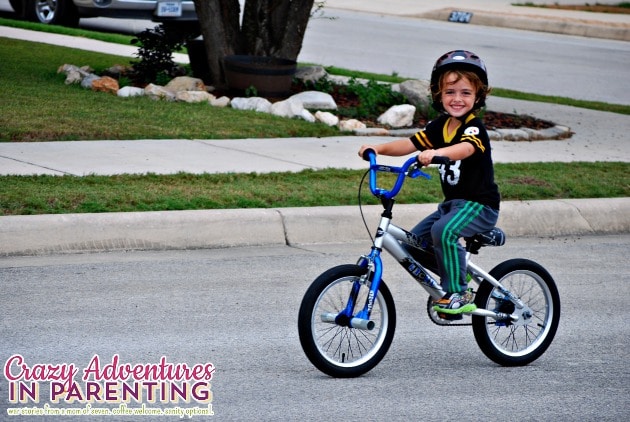 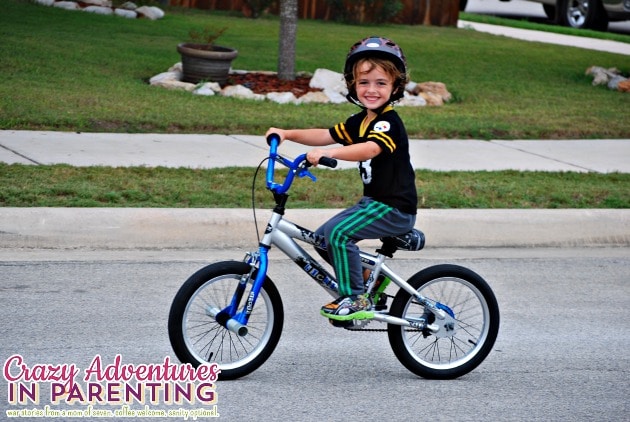 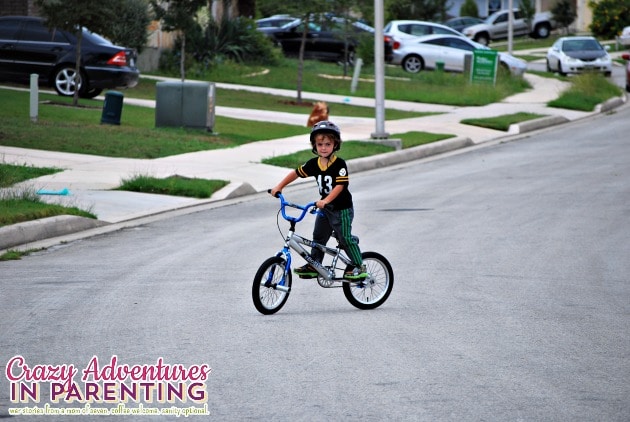 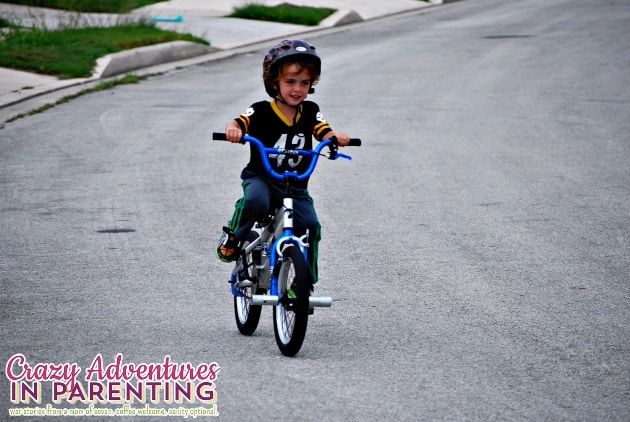 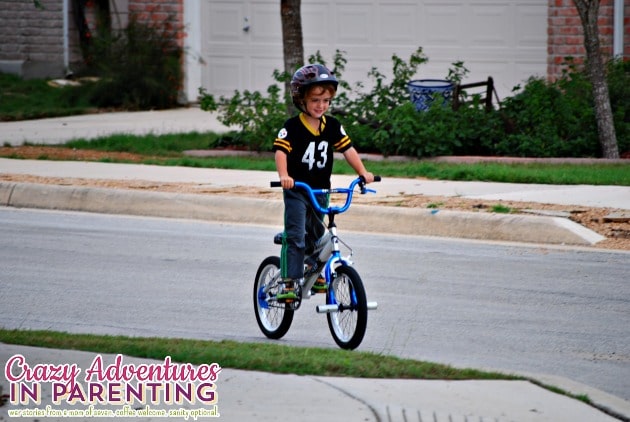 I think about how I was almost away at the Type-A Conference in Atlanta this weekend, and how I might’ve missed this if I wasn’t here at home.

I’d like to think that he would’ve waited to do that for me, and that maybe they wouldn’t have gone on a bike ride, causing his training wheel to come off, which then turned into his immediately learning to ride.

It’s those ripple effect things that happen, you know? And I am so grateful the ripple of my staying home lead to this. My Baby Dude – he’s a bike rider! 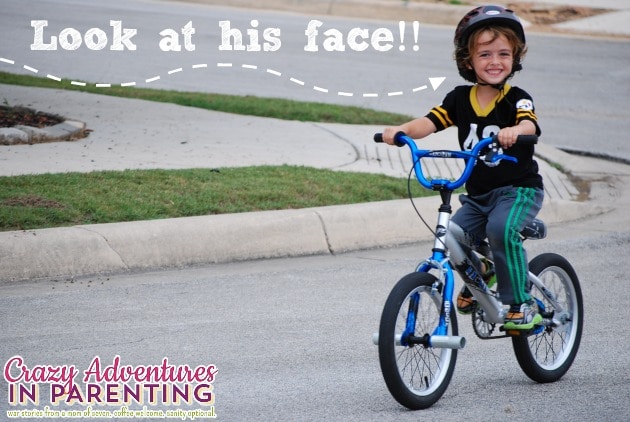