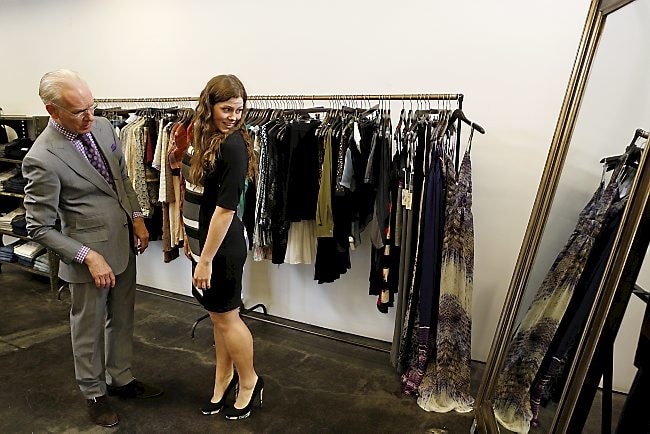 As someone who has struggled with weight loss herself, I watch the show for inspiration. When I saw the reveal last night for the finale, I gasped, like many of you. She looked so healthy, so competitive, the last time we saw her. We cheered with many tears in our eyes as Tim Gunn gushed, “Good heavens. I didn’t even recognize you” during his makeover episode when it was reported she went from a size 20 to a size 6. We shared more tears with her as she chanted “Get your life back” finishing the triathlon first.

But what we saw last night was scary, and I want to know why NBC didn’t keep better tabs on what was happening.

I know many folks have had doubts about this shows efficacy, how it could take obese people with more than 80 pounds to lose and transform them in such a way that would last. How could this be healthy? How could this be helpful (to them and to others). From everything I’ve ever read and witnessed, NBC had their tabs on each contestant (in the past) to avoid stuff like this from happening. How did they let this one by? Did they do it on purpose as a publicity stunt?

I truly wanted to give her the benefit of the doubt. She was an athlete, a once competitive swimmer, after all – what if she went home after taping ended and swam all day every day from October to yesterday, you know? We didn’t know, so I took to the web for interviews to see what I could find. I knew there wouldn’t be photos or anything, but when I looked at her interviews, I found the confirmation I needed to prove she had, indeed, taken it too far.

In an interview with TwinCities.com, she stated:

“I’m not going to lie, I’ve gained weight coming home, I’ve lost weight. I’ve binged. I had a hard time over Thanksgiving. Those are all natural adversities I faced, but to overcome those is what’s made me strong and what I’ve learned so much from.”

She… gained weight? She clocked in at 150 at the final weigh-in sometime in October. From then until now, I could almost see her 45 pound weight loss because of swimming daily and eating completely clean. But she admitted to Twin Cities she had “gained weight” and “binged” over the break means that she didn’t swim hard core as I’d hoped she had. It seems she was TOO hard core in an unhealthy way.

*Edit* Rachel gives a conflicting, sunnier interview to People.com, where she stated the opposite than she said above:

Asked about her diet and exercise regimen, the L.A.-based voice actress – who told reporters that her height is 5’5″, although her driver’s license states that she is 5’4″ – specified that in the months leading up to the finale, she had been taking in 1,600 calories a day via five small meals while following the advice of the show’s dietitian, Cheryl Forberg.

At the same time, she said she had been taking “maybe three, four classes a day” at the gym, including Zumba and spin. “I even went home over the holidays to Minnesota,” she said, “and I went running outside.”

I always have my concerns about sending the participants home, particularly over the holidays, when most people struggle with all the temptations and home-cooked favorites. But these are people who had eating issues before, which is why I thought NBC watched them like a hawk to make sure they didn’t take it this far.

When interviewed about her diet and weight loss after the show, this is what Rachel had to say to E! News:

I make sure that I plan ahead. I cook my meals; make sure I’m ready for the week and that I have some snacks prepared. If my day is really busy with work, I have a snack prepared and ready to go so that I don’t have to take the quick fix. I eat five times a day. The key, really, it’s in the kitchen, you got to work hard in the kitchen, too.

While this sounds all healthy and is recommended by many trainers, it is a distinct contrast to the above earlier interview she gave Twin Cities. Even if she binged and gained weight during Thanksgiving of 2013 (end of November), that left her with 2 months to lose over 45 pounds to reach 105 for last night’s finale. Without Bob. Without Jillian. And, apparently, without NBC watching how she did it.

Here’s the final results displayed in the chart below on Wikipedia showing her BMI puts her in the underweight class (a first ever for The Biggest Loser franchise):

The number “105” struck a chord for many. When someone formerly anorexic pens a heartbreakingly post about what the finale did to her, it made my stomach turn even more. She could identify completely:

I watched Rachel weigh in with my arms crossed, thinking that, perhaps, I was projecting my own jealousy onto her, and scolded myself for skinny-shaming her. I imagined she’d land at about 120 pounds or so, but when the number ticked to 105, I shut off the TV. I didn’t even wait to see Rachel win. I didn’t want to watch her be celebrated.

I’m not pulling the eating disorder fire alarm. I don’t have the authority to do that, nor the information to do that, and I, of all people, understand how hypocritical and obnoxious it is to do that. What I am doing, though, is recognizing how Rachel’s figure rocketed me back to my own anorexic past — made me long for the body I used to have. That’s frightening. If a look at her, someone for whom confetti rained down and to whom a quarter-million dollar check is doled out, can have that effect on me, I wonder what it can do to someone who’s even more fragile. I’d rather not know.

The fact of the matter is, over 15 seasons, NBC’s hit show The Biggest Loser has helped to motivate many hundreds of thousands of people to make the appropriate changes in their lives to lose the weight, get healthy, eat well, and live life. I know some critics and cynics balk at the idea that it took a show to do it, but it was how these were real people fighting for their lives (literally) before you. It was hard not to connect and to be inspired if it resonated in you. Rachel herself claimed the same in many interviews, that season 14 finally urged her to do it after becoming obese.

I think what happened last night should be a HUGE wake-up call for NBC. Their Facebook page is continuing to receive thousands of very concerned and outraged messages from fans of the show as to how this was allowed to happen. As of now, NBC and reps from this show have yet to comment or release a statement. I’m not sure we’ll see Jillian or Bob comment on this until NBC does.

*Edit* Jillian and Bob have commented the same statement, NBC and TBL haven’t commented yet.

If they thought they had strict control over the wellbeing of their contestants, they were obviously wrong. And with that finale last night, celebrating Rachel’s unhealthy loss in with a cool 250K and confetti shot into the air, all the good and inspiration in their messaging over the last fifteen seasons was undone in the span of five minutes.