We try to go on a walk every day, with Baby Dude riding his bike, and Baby V either in the stroller or the bike trailer. Today was no different, we left even earlier than normal so we could play at the park before we left to pick up the kids. As we rounded the climby thingie, we saw it at the top of the stairs – a lost ray gun.

It sat there all lonely and dejected, on its side, waiting for someone, anyone, to find it. My son immediately perked up and lifted it between his baby fingers. We have a knack for finding lost items on our walks, and today’s find was no exception. He fiddled with it a little, pushing things, and flicking knobs, he finally got it to sound. “PEW PEW PEW!” it rang out, loudly, as he depressed the plastic trigger. He flicked a switch or something again, “KRRRRRRRRRR BOOM! KRRRRRRRR BOOM!” it sounded out, even louder now.

He was fascinated.
Baby V wanted to steal it from him. Or bash him over the head with it.
Mom immediately flipped a 180, from Ooh, what cool find, dude! to CRAP, where I can I accidentally stash it so we ‘forget’ to bring it home?

I asked to hold it for a second, and did my best to find a battery compartment, just to see if I could sneakily take out the batteries, but NO DICE, I found NOTHING. I can’t for the life of me figure out what powers this outrageously loud contraption, other than the creepy “red eye” laser thingie on the side that looks like it’s from Transformers, or something. I think it’s staring at me every time I look at it. It knows it’s won because there’s no battery compartment, I can’t make it stop the noice! Gahhhhhh!! 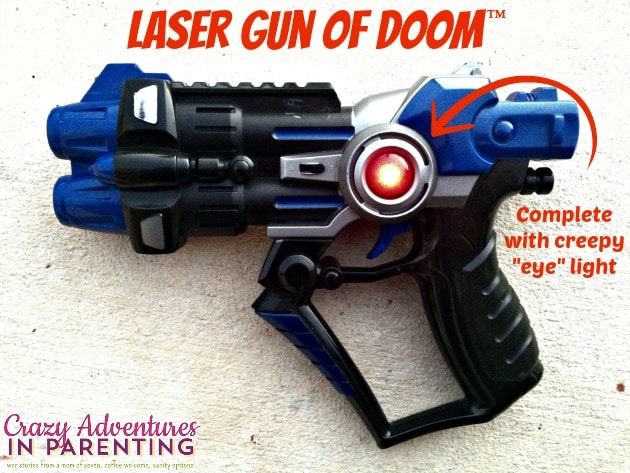 For the remaining fifteen minutes at the park, it’s all you heard. “PEW PEW PEW!” or “KRRRRRRRRRRR BOOM!” The seconds in between the sound change switch being flipped were like GOLD to me. I could actually felt my hands again, and could smell the air once more. It made me realize how much I valued life (and my hearing), and how much THIS TOY GUN HAS GOT TO GO!

Unfortunately, there was no leaving it. The kids were too well aware of its existence to accidentally leave it on the bench, or on the slide, or something. So for the entire fifteen minute walk home, Baby V had control of it. No knowledge of the sound switch. No idea how crazy the sound was making me. Baby Dude pedaled wayyyy far ahead of me, too, so he didn’t have to listen to the racket. It was just me, gritting my teeth, wishing for her baby HULK SMASH ability to kick in and suddenly get bored with it, toss it to the curb, smash it to eleventy-billion pieces, and restore my sanity in one foul swoop.

But that never happened. We brought it home. “I can’t wait to show my brother!” Baby Dude cried happily, snatching it back from Baby V, wanting to bring it into the car with us, as we were about to leave to get the kids from school.

“Ooohhhh heyyyyy, there. Buddy. Pal. Compadre. Friend. My little dude. So, um, how about we DON’T bring it with us to get your brother and sister from school. How about we HIDE it and have it be a surprise when get home? And you can show him then What do you think?”

MY BRILLIANT PLAN WAS GOING TO WORK! I was going to pretend hide it, but really throw it in the trash, and cover it with the leftover wrapper from the super size toilet paper we bought. BRILLIANT!

SCORE! We took the gun, hid it behind one of the couch pillows, but as soon as he left to get in the van, I slipped it into the trash can. BOOM, baby!

We happily went to get the kids from school, and I practically skipped back to the van with the kids hands in mine, knowing I’d done my best to hide the toy and we’d just chalk it up to Baby V’s adventurousness as to why it was suddenly “missing.” (I know, it sounds so horrible, but y’all haven’t heard the dang thing emoting the loudest ray gun shriek in the known universe!)

“You WON’T believe what we found today at the park!” Baby Dude immediately spills out in excitement. Despite feeling a teeny tiny bit guilty at throwing away his toy, I knew it was for the greater good. “I can’t WAIT to show you!” he continued.

Upon returning, Baby Dude went to the hiding spot on the couch, but didn’t find it. He flipped over every ding-dang pillow onto the floor, and turned to look at me in horror. “Mooooooooom! My gun is MISSING!”

Meanwhile, as if she suddenly understood English, and had X-ray vision, Baby V immediately and unknowingly made a bee line for… you guessed it.. the garbage can. I heard the rustling of the plastic, but didn’t realize what it was (over the commotion in the living room trying to find the gun) until she emerged with it in hand, shortly after I heard the “DONG!” sound from the metal lid hitting the metal can.

“THERE IT IS!” he shouts, all fantastically happy and suddenly all I hear is “PEW PEW PEW” with all eleventy-billion kids doing parkour off my couches and jumping on pillows and OMG! Not again. Meanwhile, Baby V shot me this Dennis the Menace victorious smile my way, letting me know that she totally kicked my ass (once again).

So if (after bedtime) you happen to see a Craigslist ad for a toy ray gun from San Antonio, Texas for free, you’ll know why.