If you could see me right now, I’m giving today the finger.

If today were a person, it’d be a dude so I could kick them in the friggin gonads so hard, they’d be spitting out their junk.

I WANT TO HULK OUT AND SMASH THINGS SO HARD, UGHHH!

I can’t get ANYTHING done!!!

My oldest had to go to school for orientation to get her books. Took her hours last year. Today? 45 minutes. I wasn’t ready to have to go get her that soon.
Why do I need to go get her, you ask? BECAUSE SHE STILL DOESN’T HAVE A DING-DANG LICENSE BECAUSE THE STATE OF TEXAS SUCKS AND MAKES YOU JUMP THROUGH HOOPS FOR REQUIREMENTS AND WAIT FOREVER ZOMGWTFBBQ!!!

I had to wait a good half-hour to even TAKE her to school after I started the car.
Why, you ask?
Because we (and by we, I mean, my husband) didn’t put the sun-reflector on the dash, and in the 104-degree heat, I couldn’t even TOUCH the steering wheel.
So, there I was, putting a frozen cooler ice gel thingamabob on my steering wheel, smearing it all in, trying to cool it down and looking like the biggest a-hole, sweating and swearing at my car and the reflector thingie.
I mean, why don’t they put themselves up, anyway?
Don’t they know where the heck we live?
San Antonio-friggin-Texas, where it’s balls hot. Dude!
Hello? Get on it, inventors!

And I missed Kindergarten registration.
Apparently, I fail at calendars because today is Friday and the TENTH and NOT the NINTH and I missed it by a @#(*$&@#$ day. I ROCK!
I tore apart my desk looking for a letter I needed for the aforementioned registration.
This is what my bed looks like right now, because I can’t clean/throw away/organize it because she won’t let me put her down. 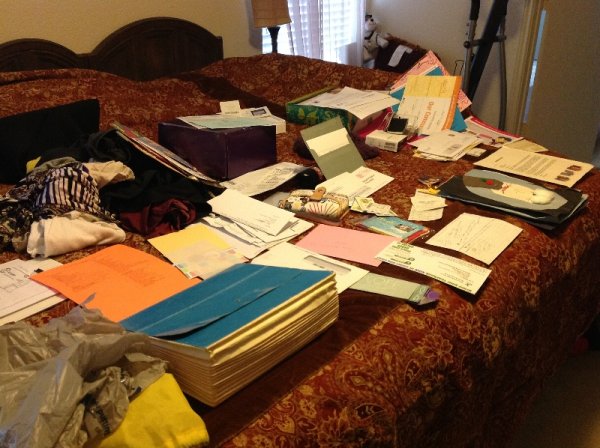 And then, as if the sky decided to screw with me more-so than today and my infant have already, it got dark. Crazy dark. And I checked the weather map and it looks like this:

So now I have all my kids inside, pissed off, because I pulled them inside for the impending monsoon about to drop on our freakin’ heads. Lovely.

I need a nap.
And a vacation.
No.. a good, stiff margarita with salt on the rim served to me by a man-servant named Hans who will fix my mess in the bedroom, flip the laundry beeping at me, and mop the floors I still haven’t done yet.
And then, after he’s done, give me a damn massage because my shoulders are so tight, I could probably break a board or two on ’em.
If he washes windows, that’d be magnificently awesome, too.
And maybe if he has a friend who babysits, that’d rock! Because then maybe his friend could get my infant to STOP BEING CRANKY because her MOMMA IS HULKING OUT IN A MAJOR WAY RIGHT NOW.